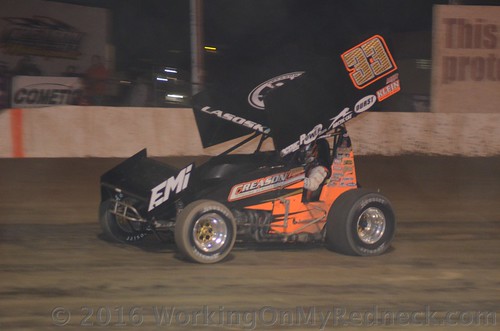 There were two faces familiar to Winter Heat Sprint Car Showdown Victory Lane that stood atop the podium on Saturday during the 2nd edition of the marquee event at Cocopah Speedway.

Danny “The Dude” Lasoski, who captured the inaugural title in 2015, led the final 29 laps of the finale to score his first victory of the year. Meanwhile, Shane Stewart, who won back-to-back features (Wednesday and Friday) entering Saturday, charged from 19th starting spot to finish in seventh place to garner the 2016 championship by eight points over Dale Blaney.

“We didn’t really change a whole lot from our package that we had last year,” Stewart said. “The main thing was we came here and raced. We got ourselves back in the groove. I think this will help us going to Florida (next month to start the World of Outlaws Sprint Car Series season).”

The feature began with The Dude quickly charging to second place from his fourth starting position. He then passed Greg Hodnett, who led the first lap, with a classic dirt track slide job entering turn three on Lap 2.

Lapped traffic came into play on Lap 11 and remained heavy until the checkered flag. With Lasoski mired behind traffic, and being the “bottom feeder” that he his, Pittman chose to slide up to the top of the track in turns three and four and steadily reeled in the leader – a scene eerily similar to Friday night, when Stewart used a late-race pass by powering around the top groove to steal the victory from The Dude.

“I wasn’t going to let that happen twice,” Lasoski said. “I knew what I did last night was completely driver error. We had a really good race car tonight. Hopefully we can come back next year.”

Pittman closed within a car length of Lasoski on multiple occasions, but catching Lasoski and passing him on Saturday night was a whole different story. Pittman settled for a second-place finish, which was his best result of the Winter Heat Sprint Car Showdown.

“We made some changes there for the feature that, man, made all the difference in the world,” said Pittman, who placed third in the event standings. “I was really good on the top in (turns) three and four and then it got really clean. It started to rubber a little on the bottom in (turn) three and four. If it hadn’t done that I thought we had a shot at it, especially in traffic.”

Hodnett rounded out the podium, which wrapped up a fourth-place result in the standings.

“We put different bars, different shocks on it for the feature and just weren’t good enough,” he said. “The other guys were way better. We’re fortunate to come out of here with another top three.”

While the battle up front was intense, Stewart’s charge through the field was impressive., kind of like a warm knife through butter. His Larson Marks Racing team was forced to change an engine following a qualifier and Stewart narrowly made it onto the track in time for a B Main, where a runner-up finish transferred him into the 19th starting position for the main event.

“We struggled a little bit,” he said. “Our team is really good. They just put their heads down when we have a little bit of an issue and just get through it.”

Stewart advanced inside the top 10 by Lap 11 of the feature and he gained three more positions during the second half of the feature. That kept him in the lead of the championship standings, which paid $4,000 to win thanks to Cometic Gasket, JE Pistons and K1 Technologies.

Blaney, Pittman, Hodnett and Lasoski, who, respectively, placed second through fifth in the event standings, each received $1,500.

Saturday’s event began with a special announcement as Henry Van Dam received the Big Al Sportsmanship Award, which was established for this year’s event in honor of Al Tschider. Tschider founded the Big Al Kids & Motorsports Foundation, which was created to provide motor sports trips and racing opportunities for children battling life-threatening conditions and illnesses, and he passed away suddenly last August.

“He was able to do a lot of special things for kids that were just amazing,” Van Dam said. “To win the award is awesome because I know how much effort he put into the foundation and to be a part of that is huge.”

The five nights of Winter Heat provided some really close and very exciting racing at Cocopah Speedway. While the rest of the country was was huddled together trying to stay warm with freezing temperatures snow in some areas and lots of rain in other places, there was Winter Heat brewing in the outskirts of Yuma, Arizona!