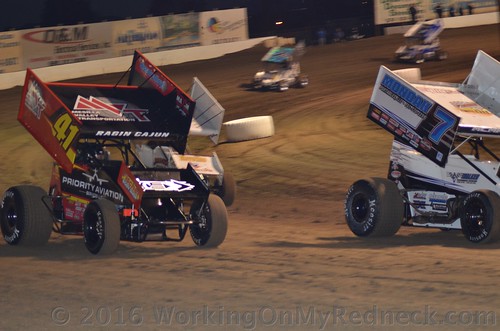 Even the Southwestern desert of Yuma, Az is subjected to Mother Nature.  The rain that fell on Monday and Monday night certainly put standing water on the infield of Cocopah Speedway.  However, the track promoter, Greg Burgess, and his crack grounds crew had pretty much taken care of that issue when the local forecast came into play.  The Tuesday night forecast is for rain all during the scheduled race time.  With that in mind the race was just postponed for 24 hours.

Nevertheless, the prognosis for the third night of racing, whether it is Tuesday or Wednesday is for close and very fast racing!

Just how fast is fast?

Saturday night there was a radar gun on the premise supplied by SpeedShift TV, who is streaming the races via the internet.  That radar gun caught both Craig Dollansky and Kyle Larson diving into turn number one at 124 mph!

Greg Burgess expressed his surprise, “I knew we had some very good, very fast sprint car drivers with us for the Winter Heat, and I knew they were capable of turning in some impressive lap times, but I really didn’t think they were going to go that fast.”

Burgess is forecasting those speeds to even go higher for Wednesday night.

“I expect it to be the fastest track of the week and possibly break that 124 mph speed mark,” the track promoter boasted.

Just as a side note, Saturday night the race track’s lighting went dark on two different instances.  The first time the track lights went dark was after a heat race, which did not pose a problem.  However, on the second occasion there was the possibility of a catastrophe!  That is because the lights failed in the middle of a race with all the competitors very heavy on the loud pedal!  But the professionalism of those drivers came out when all of them were able to slow down and stop without piling into one another, avoiding a disaster!

It appears that Winter Heat will be loosing one of the stars that has one win this week, Kyle Larson.  Larson must travel to Daytona to practice for the upcoming Rolex 24 at Daytona.  But there are two racing stars coming in to race in the final three days, Hendrick Motorsports driver Kasey Kahne, and USAC and former Chili Bowl winner Bryan Clauson.

So for those of us who attend this five nights of racing, we get an unexpected additional day off before those 800 horsepower, ground pounding, mudslinging, 124 mph sprint cars return to the track.

SO TIL NEXT TIME, I AM STILL WORKING ON MY REDNECK!