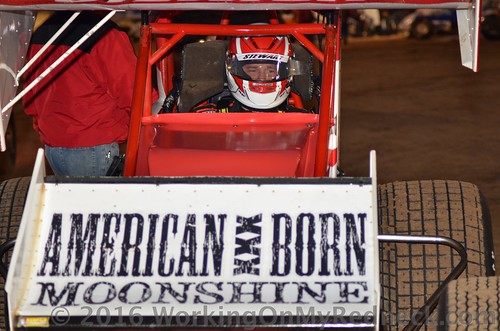 We all know that everyone complains about the weather, but rarely does anybody do anything about it.

Well the little boy, better known as El Nino, wreaked havoc with the Southwest and postponed the third round of the five-race series, The Winter Heat Sprint Car Showdown at Cocopah Speedway one day until Wednesday.  Through out the day the weather in the Yuma, AZ area was clear and sunshine, however, the evening forecast was not looking good.  As the time grew closer to hot laps, the dark clouds began to form, and the reality was that there was going to be another race on hand.  That second race was going to be against the incoming rain!

All went well for hot laps and the preliminary heats.  However, as the third of five qualifier races began, the sky began weeping.  Light rain began to fall, however it only added more grip for the lightening fast track that was already in use!  The added moisture to the track surface really made the drivers get up on the wheel while they were mashing the loud pedal!

With Kyle Larson and his employee, Shane Stewart, started on the front row for the feature, the storyline for the night was right before our very eyes.  When the green flag flew Larson quickly jumped into the lead. For the first 25 laps he was showing the field the fast way around Cocopah Speedway.  Even though Larson was dominating the field, Shane Stewart was hanging back in his shadow, hoping that Larson would make a mistake.  I am reasonably sure that Stewart thought that was only way that he was going to have a shot at beating Young Money, and winning the race!

Then on lap 25 it happened!  While Larson was passing lapped traffic he hit a rut, momentarily got out of the throttle to gather his sprinter back up, and that gave Shane Stewart the break that he so desperately needed to zip past Larson.

“I’m just glad Mother Nature cooperated a little bit,” said Stewart, who won by more than seven seconds and lapped up to eighth place. “I’m very happy we were able to get the race in. It’s always a pleasure racing Kyle. He’s so darn good that he’s almost like racing Donny (Schatz) honestly. He sets such a strong pace.

“Everything worked out good for me. Sometimes it’s not always good to be leading. When he dropped down there and hit that hole I had a pretty good run on him and when he got sideways we were able to sneak by.”

The pass was the peak of a wild feature, which began with Larson quickly powering into the lead from his pole position. While Stewart was able to remain within striking distance, Larson hit traffic on Lap 4 and had lapped up to 14th place before the first caution of the race on Lap 12 for Terry McCarl.

Stewart, who restarted with two lapped cars between him and Larson, got by one lapped car before the second-and-final caution on Lap 14 for Seth Bergman.

Stewart quickly maneuvered by the lapped car and slowly reeled Larson back in. The duo entered traffic on Lap 20 and Stewart nearly crashed in turn two on the ensuing lap. However, he saved his car and position before once again closing the gap on Larson.

Meanwhile, traffic was thick and most of the lapped cars remained on the bottom groove, which forced Larson to run up against the tricky cushion several lanes up the track. Larson hit a hole and bobbled exiting turn two with six laps remaining and Stewart was there to capitalize.

While Stewart zipped around him and took the lead, Larson spun completely sideways and came down the track toward the infield as his fellow competitors dodged him at more than 100 miles per hour.

“Thankfully we still finished second,” he said. “I all but spun out or turned over off (turn) two there. I was pointed at the field and could see Tasker Phillips coming at me. I must have missed him by a foot. (I’m) just disappointed, but glad I didn’t get hit there.”

Larson held on to the runner-up position, which propelled him into the lead of the Winter Heat Sprint Car Showdown championship standings.

Meanwhile, Jason Solwold put together another consistent night. He finished third – more than seven seconds behind Larson and 14 behind Stewart – to advance to second in the event standings.

“We kind of set up to run the bottom,” Solwold said. “We were a little too snug to run the top. Those guys kinda got checked out there. We got into lapped traffic and I was just about the same speed as everyone else was in dirty air. All in all, we had a pretty good night.”

The racing resumes for the final two nights on Friday.  And if the first three installments are any indication on what is in store for Friday and Saturday, I just can’t wait!