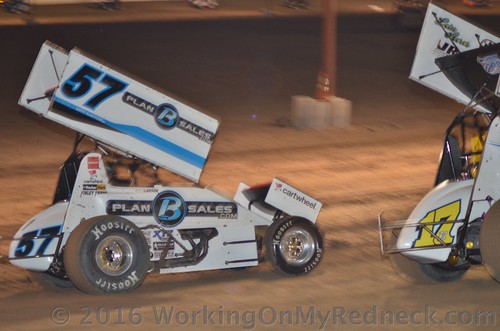 With two races down and three more to go, one of the storylines that has unfolded during The Winter Heat Sprint Car Showdown at the Cocopah Speedway has been redemption and resumption.

In Friday night’s opener, Dale Blaney, who went 0-fer-five last year in the inaugural event, brought home the $12,000 check for winning the feature and leading the race wire-to-wire!

For Blaney it is quite a contrast to his 2015 venture here, when he struggled for four nights.  However on the fifth night Blaney led the field for 29 3/4 laps.  As Blaney entered turn number three looking for the checkered flag to give him the win, Danny The Dude Lasoski drove his car deep and hard underneath Blaney and administered the “ol slide job” on Blaney, and took the win away from him as they exited turn four!

“Being in someone else’s car last year was tough, you know the way I sit it it, the way I drive it, it was just totally different,” Blaney said from atop Victory Lane Friday night, comparing 2015 with 2016.  For those that are not familiar with the size of Dale Blaney, he played basketball at the West Virginia University and was drafted by the LA Lakers in 1986.  (Last year Blaney drove the Paul Silva #57 sprint car that is being driven this year by Kyle Larson.)

This year he is racing his own sprint car and he has stated that his is much more comfortable.

On Saturday night Kyle Larson started on the outside of the front row and had to settle in behind the pole winner, Greg Hodnett, for the first few laps until Hodnett spun his car in turn #2 and gave the lead to Larson.

On the restart Young Money set sail for the rest of the race, and nobody really had anything for him for the remainder of the night.

“It was a good solid night, no mistakes really,” said Larson after the race.  “I passed cars every time I was on the track, and we got lucky with Hodnett spinning out there as the leader.  He caught a hole and it upset his car and he sun out”.

“It would have been a good race,” he continued, referring to his trying to reel in Hodnet.  “Traffic is always interesting and you never know what’s going to happen,”  Loarson added.

Through two nights of racing, Blaney leads the field in the overall points.  Larson holds down the second place, Jason Soldwold sits in third, Shane Stewart (who drives for Larson in the World of Outlaw Series) holds down fourth, and Danny The Dude Lasoski rounds out the top five.