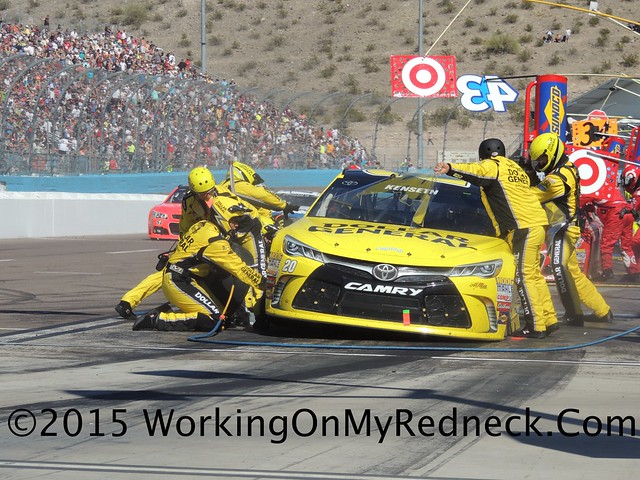 The powers to be at NASCAR have handed down their decision regarding the incident involving Matt Kenseth and Joey Logano Sunday in the race at Martinsville Speedway.

Matt Kenseth, the driver of the No. 20 car, has been penalized for an infraction that occurred during the Nov. 1 race at Martinsville Speedway. This is a Behavioral Penalty (Sections 12.1, 12.8). Kenseth has been suspended from NASCAR through the completion of the next two NASCAR Sprint Cup Series championship events and placed on NASCAR probation for a six-month period following issuance of the penalty notice.

“Based upon our extensive review, we have concluded that the No. 20 car driver, who is no longer in the Chase, intentionally wrecked the No. 22 car driver, a Chase-eligible competitor who was leading the race at the time,” said Steve O’Donnell, NASCAR executive vice president and chief racing development officer. “The No. 20 car was nine laps down, and eliminated the No. 22 car’s opportunity to continue to compete in the race.

“Additionally, we factored aspects of safety into our decision, and also the fact that the new Chase elimination format puts a premium on each and every race. These actions have no place in NASCAR.”

Joe Gibbs Racing has stated that they will appeal the severity of the penalty.

Do we now know where the bounderies are for “boys have at ’em”?