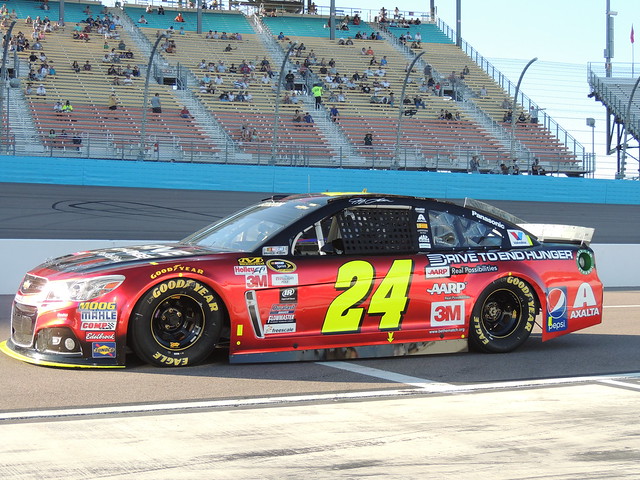 There were three things of note when the checkered flag flew at Martinsville.

2. Gordon will compete for the NASCAR Sprint Cup Series championship in the season finale at Homestead-Miami Speedway.

3. There were tears of joy in Victory Lane for Gordon, who’s at the tail end of his final season driving for Hendrick Motorsports.

Long before Gordon held off Jamie McMurray in a two-lap run to the finish as darkness consumed the .526-mile short track, Kenseth ended polesitter Joey Logano’s remarkable run in the Chase for the NASCAR Sprint Cup by T-boning and driving race leader Logano hard into the Turn 1 wall on Lap 454 of 500.

Kenseth’s car was crippled at that point, the victim of a Lap 435 wreck that also involved Logano’s teammate, Brad Keselowski.

But when Kenseth clipped the left rear quarter panel of Logano’s Ford and slammed him hard into the SAFER barrier, it was retaliation for Kansas two weeks earlier, when Logano knocked Kenseth out of the way—and effectively out of the Chase for the NASCAR Sprint Cup—in the closing laps of the second race of the Contender Round.

Kenseth failed to advance to the Eliminator Round, which started at Martinsville on Sunday. And now Logano likewise is in extreme jeopardy of seeing his dream season end before the Championship Round.

“I think what happened at Kansas is a completely different deal,” Logano said after a visit to the infield care center. “We were racing for the win, and he blocks you a few times, and then we raced hard and he blocked me the last time and we spun out. That’s what happened there.

“Here it was just a complete coward move, especially for a championship race car driver and race team. Just a complete coward. I don’t have anything else to say. It’s a chicken-you-know-what move to completely take out the leader when your race is over.”

Logano, who was bidding for his fourth straight victory, finished 37th and is eighth in the Chase standings, 28 points behind Kevin Harvick in fourth, the last transfer position into the Championship Round.

It was clear from Kenseth’s post-accident comments that the driver of the No. 20 Joe Gibbs Racing Toyota felt it was important to assert himself.

“You never like to be in these situations,” Kenseth said. “They really stink, to be honest with you, but sometimes you get put in these spots, and you’ve got to try to keep respect in the garage area. You can’t get yourself ran over.

“You can’t get in the Chase next year and get ran over for the same reason. Like I said, hate the way it ended. Wish we were out there celebrating or having a shot for the win like we did before we got wrecked, so a disappointing day.”

NASCAR called Kenseth, crew chief Jason Ratcliff and team owner Joe Gibbs to the sanctioning body’s transporter after the race. Steve O’Donnell, NASCAR executive vice president and chief racing development officer, said the incident will be reviewed and subsequent action, if any, will be announced later this week.

None of the Kenseth-Logano drama, however, could mute the elation of Gordon, the first driver to clinch a spot in the Championship Round at Homestead.

“Yeah, baby, yeah—we go to Homestead!” Gordon screamed after crossing the finish line .335 seconds ahead of McMurray. “That was huge! That was huge! Boys, I love you guys.

“That’s what I was talking about. We just keep digging and fighting…”

“It was a joke. I’m coming back next year!” Gordon quipped about his impending retirement. “This is the sweetest, most amazing feeling. I am so proud of this team. You want to talk about holding back emotions; right now man, wow, we’re going to Homestead! I can’t believe it.”

Kyle Busch had a fight on his hands, too, after spinning in Turn 2 on Lap 171 and damaging the front suspension of his No. 18 Toyota during contact with the No. 3 Chevrolet of Austin Dillon. But Busch rallied to come home fifth and is tied with sixth-place finisher Martin Truex Jr. for second in the Chase standings.

Keselowski and Kurt Busch, victims of the same wreck that ended Kenseth’s strong run, finished 32nd and 34th, respectively, and are approaching must-win status at the next two races in the Eliminator Round, at Texas and Phoenix.

This week there was a lesson illustrated to all the race spectators and TV viewers, it is call Karma!  Some people may say “what goes around comes around”.  If my memory serves be correctly John Lennon had a hit record called “Instant Karma”.

Check out the unofficial results of the Goody Headache Relief Shot 500.