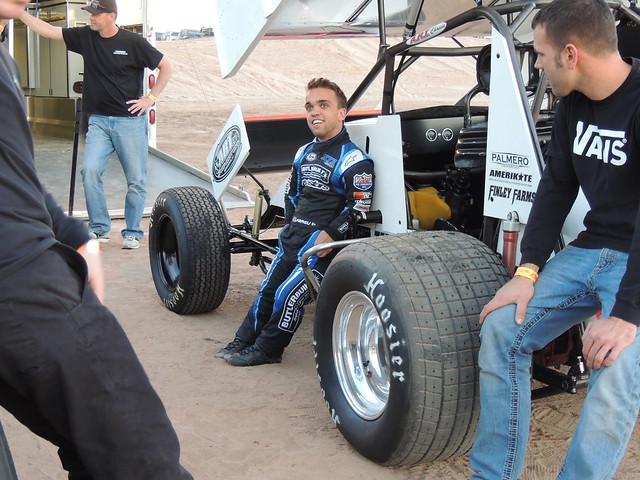 As the green flar flew to start to feature, the series point leader, Kevin Thomas Jr., jumped into the lead at the start, followed by his Kunz/Curb-Agajanian teammates Christopher Bell, Tanner Thorson and Abreu. Polesitter Steve Buckwalter slowed on the second lap, three cars made contact with the stalled car of Buckwalter, resulting in Tyler Nelson flipping six times and Chet Gehrke also flipped his hot rod as well.  Nevertheless, both drivers escaped any injury.

Two additional cautions ocurred between laps three thru seven that slowed the pace of the event. All the while Abreu moved into third place on Lap 5, and into second position  three laps later.  Abreu trailed Thomas by four car lengths when Thomas suffered engine problems, bringing out the caution and ultimately retiring from the event.

When the green waived once again Abreu pulled away from Bell, and ran the remainder of the race unscathed and unchallenged, grabbing the victory while driving the Keith Kunz/Curb-Agajanian owned Bullet/Toyota No.97.  Just for the record, the Keith Kunz Motorsports entries finished 1, 2, 3, 13 & 14 for the night!  When the Keith Kunz Motorsports hauler pulls into the race track, every competitor knows that he absolutley must beat that team, no matter who is behind the wheel of his equipment!

“The car was great on the cushion tonight” commented Abreu who won his second career preliminary night feature at the track. Behind Rico was Bell, Thorson, Tracy Hines and Zach Daum completing the top five finishers.

There was thirty-one (31) cars that competed in the Thursday evening’s events.  That was the largest car count since the 2010 event, that was the last time that I was at The Belleville Nationals!

It appears that Rico’s racing star is on a trajectory that is going to take him straight into the upper echelons of the NASCAR realm in the not too distant future!