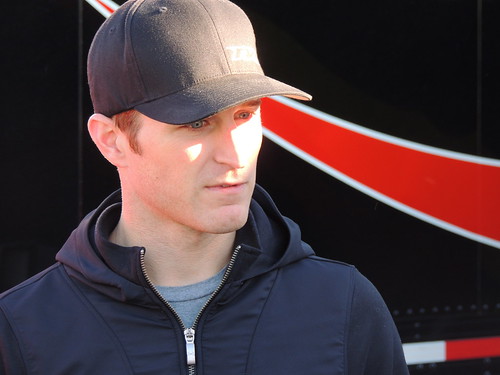 Kasey Kahne continues to have, as the theme song from the James Bond movie Goldfinger talked about, the midas touch Saturday night!  It was Kahne’s sixth time in a camping World Truck race and he now has five victories and one second place finish!  His winning percetage is an astronomical 83.33%!

For the second weekend in  a row, teen-ager Erik Jones experienced major disappointment as he led 88 laps at Charlotte by sputtered in the green/white/checkered restart and wound up second to Kahne.

A week ago at Kansas, Jones dominated in his Kyle Busch Racing Toyota Tundra but ran out of fuel while leading with less than five laps to go.

On Friday, less than half a lap before Jones would have taken the white flag, Daniel Hemric’s accident in Turn 1 caused the fifth caution of the night, sending the race to overtime.

Jones picked the outside lane for the final restart on Lap 138, but couldn’t clear Kahne, who side-drafted Jones’ Tundra off the final corner and beat him to the stripe.

I can’t believe it,” Jones said. “This just really, really hurts. I wanted this one bad. To have the fastest truck two weeks in a row and not win just hurts. I don’t know what to say. It’s a bummer to come home second. It’s a shame when they come down to a green-white –checkered like that. We had the fastest truck all night. That’s two weeks in a row that we have had by far the best truck in the field. We’ll have to work harder man. We will get there.”

“I feel like we’ll be on a roll when we get there. We ran hard the whole last lap. I was wide open the whole lap and we got a run off turn four. And he side-drafted off of us and beat us to the line. It’s hard to stop that. I wish there was something I could have done different and stop it, Jones lamented. ”

“Jones was really fast,” Kahne said. “He was kind of in a league of his own when he could get to clean air. I knew if we could stay back and stay with him (on the final restart), as long as he didn’t get to clean air, it would be all right…

“I was able to side-draft, and it worked out perfect to get back to the line.”

The old ABC addage from their TV show called Wide World of Sports reverberates in the back of my mind, “the thrill of victory and the agony of defeat”, and was exemplified Saturday night at the Charlotte Motor Speedway!