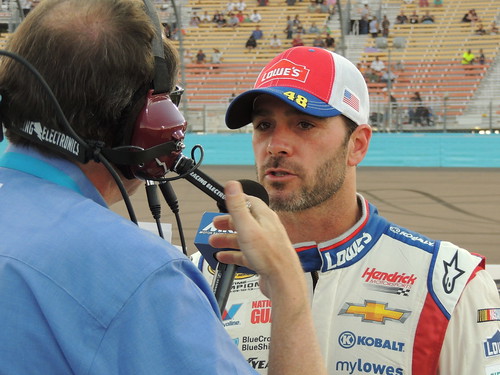 Thanks to a brief but wild Kansas spring storm and the long delay it produced, Jimmie Johnson on early Sunday morning became the first Sprint Cup driver to win a race on Mother’s Day since 2007!

Johnson’s victory – which was recorded just after midnight local time because of a delay of 2 hours and 16 minutes – was his third of the season and his third at the 1.5-mile Kansas oval.

“It was a long, hard night,” Johnson, who led just 10 laps and who spun out unassisted early in the race, said in Victory Lane. “Once we got up front, we were able to hang on.”

Reminded about what day it was when he finally took the checkered flag, Johnson said,  “I just want to wish Happy Mother’s Day to all the moms out there. My mother and especially my wife Chani (Johnson, wife), hopefully she is still awake. I wish she was here. I wish my girls were here too, but I will be home tonight and we will have some fun tomorrow.”

The victory was the 73rd of the six-time champion’s career. It came thanks to some late-race strategizing by teams who had cars and drivers at the front of the field.

Harvick appeared to be headed toward his third victory of the season as the laps wound down after he took the lead on a restart lap with 55 laps to go. The defending series champion had a lead of over 1 second with 14 laps to go and nobody appeared fast enough to close that gap let alone get around him.

Perhaps the most bummed driver as a result of the finish was Furniture Row Racing’s Martin Truex Jr. His No. 78 Chevrolet was clearly the fastest on the track for the vast majority of the race. It led a race-best 95 laps.

But his team felt it needed to pit for fuel during the final caution. On the restart, it became obvious they had made the wrong call.

Check out the results of the Kansas race.