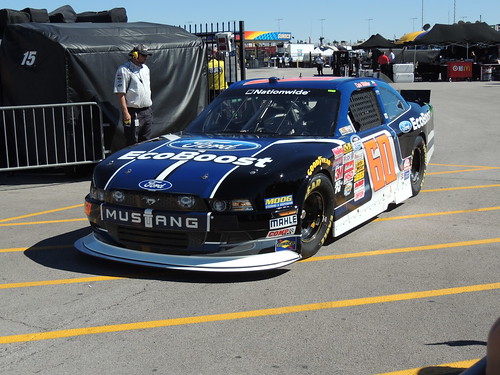 Chris Buescher, and every other driver in the field, with the exception of just one driver, was hoping for one last caution at the Iowa Speedway Sunday…..  That exception was the race leader, Chase Elliott,who was fully fueled, and had powered to a commanding lead and near-certain win in Sunday’s NASCAR XFINITY Series 3M 250 at Iowa Speedway.

With just 1 1/2 laps remaining every driver, save Elliott, got their wish granted! Jaimie Dick, running mid-pack spun, hit the retaining wall brining out the caution flag, and a green-white-checkerd restart resulted.

“When that happened, I knew we had an awesome shot at it,” said Buescher.

Buescher had on-track help — namely from Roush Fenway teammate, Darrell Wallace Jr., who provided a strong nudge as the race went green.  That would be a strong understatement!  It was a full blown beat, bang, and push to get the momemtum that propelled Buescher into the lead on the restart!

“(He) gave us a heck of a shot on the restart,” said Buescher, who relegated Elliott to second while notching his first win of the season and Roush Fenway’s fifth in 11 XFINITY Series races at Iowa. “It was a hard hit. That was almost a crash. It was exactly what we needed to get going and get to the inside and be able to pull this win off.”

Elliott took the runner-up finish in stride. He led 114 laps. His car ran fast all day long. The late-race pit strategy — partly because of minor right-side damage, he pitted on lap 177 while other leaders stayed out — nearly paid off.

“That’s racing some days,” said Elliott, who — like Buescher — enjoys a series-leading five top-five finishes this season. “You make a decision — and I think it was a good one. We had some right-side damage and it was good to come in and make sure that was OK rather than to face the opposite of that, cutting down a tire and have a day like we did in Talladega. So I think it was the right move.”

Check out the unofficial results of the 3M 250 at Iowa Speedway.

Next week the XFINITY Series races at home, the Charlotte Motor Speedway, as part of the Memorial Day weekend races.