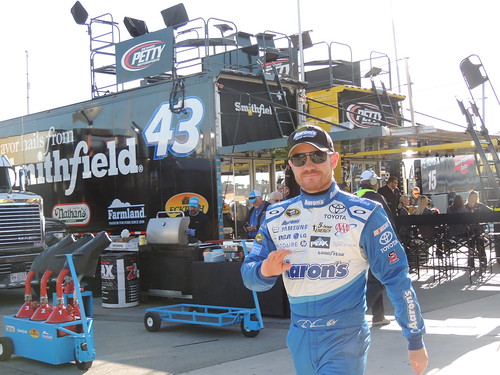 Brian Vickers said Sunday that he’ll be on blood-thinning medicine at least three months after small blood clots were found in both lungs Thursday. Vickers cannot race while on blood thinners.

Vickers said he first experienced sharp chest pain when taking deep breaths on a flight to Los Angeles on Thursday and went to a hospital later that day.

Asked Sunday if he’s worried this could be the end of his driving career, Vickers said: “Am I worried? Yes. Have I given up hope? No.”

Now that he has three months before he can even hope to race, Vickers says he’ll have time to examine his future.

“I’ll just try to figure out what makes sense with my doctors if I can come back off of (blood thinners) and go racing, if there is some kind of plan that works,” he said. “If not, then that’s that. We’re so far away from crossing that bridge at this point, I can’t really say.”

He admits he tried to convince himself he was not having blood clot issues when at his California hotel Thursday. As his breathing did not improve, Vickers went to the UCLA Medical Center in Santa Monica, Calif.

“Needless to say, it’s pretty frustrating, but I’ve been here before,” Vickers said at Auto Club Speedway. “That’s life. You’ve just got to keep fighting, you can’t give up. You never know what tomorrow holds.”

Vickers has a great outlook on the realities of life, as witnessed by the following paragraph.

“I’ve been told now three times that I’ll never race again, and I’ve raced the last two weeks,” Vickers said Sunday. “I love racing more than any other activity that I do. It’s not who I am. There’s more to life than just this. Keeping that perspective is important, but it’s also my favorite thing to do in the world, so I want to try to come back.”

After receiving this latest bit of not-so-good-health-related news. it may be time for Vickers to step away from the cockpit permanently. It appears that Vickers is at a crossroads in his life/racing career, and therefore it is time for a serious “gut check”!

Good luck to Brian as he tackles another curveball thrown his way!