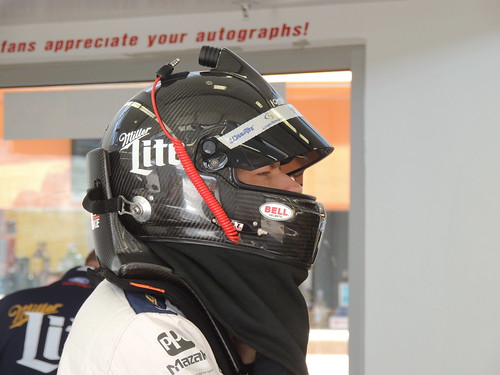 After the Auto Club 400 on Sunday at the Fontana, CA racing facility there may be an All Points Bulletin issued for the arrest of “Blazingly Bad” Brad Keselowski!  When the checkered flag flew, after two attempts at a Green-White-Checkerd, it was Keselowski who committed his own version of Grand Theft Auto or Strong Armed Robbery at the Auto Club 400!

Benefitting from a four-tire call on the last lap of regulation and two opportune cautions that extended the event nine laps beyond its scheduled distance, “Blazingly Bad” Brad passed polesitter Kurt Busch on the final lap (209) and pulled away to win his first NASCAR Sprint Cup Series race of the season, qualifying him for The Chase.

Trying to make one last desperation run at Keselowski, KuBu scraped the wall in the final corner at the two-mile track, allowing Stewart-Haas Racing teammate Kevin Harvick to pass him for the runner-up spot.

Keselowski arrived at the finish line .711 seconds ahead of Harvick, simultaneously taking the checkered flag and leading his first lap of the day. The 2012 champion, who led the series with six victories last year, recorded his first victory at Fontana — and his first finish higher than 18th — and the 17th of his career.

Using the new tires to full advantage, Keselowski shot into second place like a lightning bolt after a green-white-checkered restart on Lap 208. As Greg Biffle crashed on the frontstretch on the white-flag lap, Keselowski rocketed past Busch off Turn 2 and pulled away for the win.

“At the end, we caught some breaks, made the most of the breaks we caught,” Keselowski said. “That was kind of the story of our race. It looked like we were probably going to finish sixth or seventh. That yellow came out (on Lap 185 for debris). We came in and pitted and drove up a little bit, then caught another yellow. Now what do we do?

“So (crew chief) Paul (Wolfe) made the call to come down pit road and put four tires on. When he said that, I said, ‘This can either go really good or really bad.’ Didn’t know which one it was going to be. Some guys stayed out, some guys took two tires, all different types of strategies on the restart.

“We were able to find our way through the lanes and get to the front there, somehow end up in Victory Lane leading the last lap. Kind of a race car driver’s dream. This is one we’re going to sit back and go ‘Wow!’ for a while.”

If anybody has seen, or know the whereabouts of, the driver of the Team Penske Wurth #2 Ford, you are advised to call CRIMESTOPPERS , your tip will be handled in a totally confidential manner!

Check out the unofficial race results of the Auto Club 400.