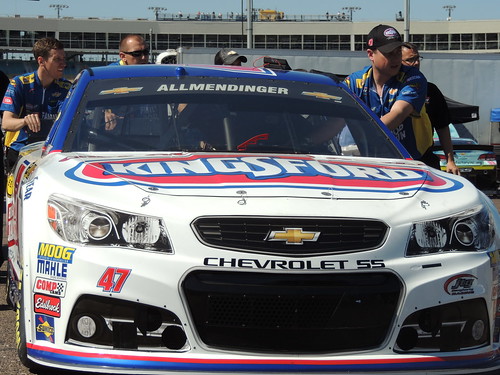 The question has been asked of of A. J. Allmendinger, would you like to do “the double”? The overwhelming answer, with a huge gleam in his eyes and and equally large smile on his face, was oh yes!

In an exclusive interview with FOXSports.com Friday afternoon at Auto Club Speedway, Allmendinger’s eyes grew wide when he talked about the possibility of racing in the Indianapolis 500 and the Coca-Cola 600 on the same day. And with good reason!

(Having been at that race sitting in the middle of turn 1, it is my opinion that Allmendinger may have had a shot at winning the race, if not for a seat belt that came loose requiring Allmendinger to pit while he was in the lead!)

Asked by FOXSports.com if he’d like to race Indy again, Allmendinger relayed the following criteria.

“The only problem is I was definitely spoiled by doing it with Roger Penske for the first time ever,” said Allmendinger. “And I would only do it if it was an opportunity to go win that race, because leading at Indy is a feeling I’ve never had before in my life. My heart was beating, shaking in the car. I want to experience that again, so if it’s the right opportunity, I’d love to do it.”

“To do the double, the cool thing is Tad (Geschickter, team co-owner) has already said he would be completely open to it, the sponsors would love to jump in on it. So, the right opportunity, yes. But at this point in my life, I’m just so focused on this No. 47 team. That’s where I want to be.”

This idea offers up an interesting question!

Would it be feasible that Roger Penske might offer Allmendinger a quality ride for the 2015 Indy 500 so that he may attempt the double?  Stranger things have happened in The Dinger’s career!