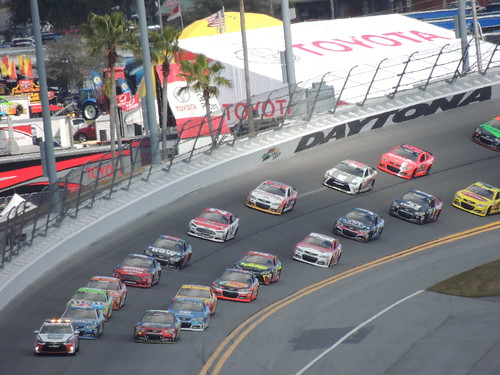 After the debacle of the newly instituted group qualifying at Daytona, the catastrophic crashes in both the Truck race Friday night and the Xfinity race Saturday, culminating with Kyle Busch sustaining debilitating injuries that included a compound fracture to his right leg, on Sunday for the Daytona 500, everyone in the stands knew that we were just one slip-up away from having another catastrophic, field clearing crash.

In light of the previously mentioned facts, it had appeared that 2015 Daytona Speedweeks had many wacky things go astray!

The qualifying debacle prompted an immediate change in the qualifying protocol.  The Denny-Danica yelling match after the Duels, a driver suspension followed by two failed appeals, Kurt Busch, a catastrophic injury to Kyle Busch’s left leg and right foot, and a press conference whereby NASCAR actually took the blame for those injuries and not better protecting the drivers!

So there was little doubt that the Daytona was going to have it’s usual bigone, you know the kind of huge crash that causes you to cover your eyes and plug your ears, the kind that taxes all the wreckers at the track, the kind that sends one car airborne testing the catchfence!

For much of the race the drivers were running 195 MPH inches apart, three-wide, and occasionally four-wide, for many laps at a time, many times five to seven rows deep!  Was this the year that we witness another devastating crash that would possibly send a car or cars airborne and take another life of one the stars of NASCAR?

As it turned out none of the potentially devastating scenarios unfolded during the day.  No, NASCAR had a perfectly normal race for Daytona, as normal as a race with a gigantic pack racing at 200 MPH with cars inches apart could be!  In fact, the most unusual thing about the race is that there were about 20-30 laps there were drivers three wide slicing and dicing with each other, swapping lanes, pushing the car in front to gain positions, a constant threat for the big one!  Instead, the aforementioned anxiety just produced some of the best, edge of your seat, hold your breath, clinch your teeth, fun!

Oh yes it was great hold your breath, listen to your scanner, move to the edge of your seat, feel your heart race, kind of fun!  It was just the previous day that we the fans were dealing with the bad news from both of the Busch brothers, and their separate reason for not being able to drive in The Great American Race.

The offseason was filled with the Kurt Busch-Patricia Driscoll, he said-she said, let’s have some character assassination bomb throwing public vendetta.  Then Jeff Gordon announces that this will be his last fulltime NASCAR season.  Will the unforeseen ever stop happening?

At last Speedweeks arrived and possibly all the negativity would stop.  Not so fast, the group qualifying, better known as knockout qualifying happened.  And knockout qualifying it was! It turned out to be a catastrophe that netted a big pile of crumpled sheet metal!  A yelling contest between Hamlin and Patrick after those two cars wrecked on two successive days.

So to reiterate, Sunday everyone just knew as the race progressed with the three-wide, bumper-to-bumper, aggressive racing, that the big one was only a heartbeat away.

But the really big one did not happen!

You could say that the Daytona 500 was just what the doctor ordered for NASCAR!