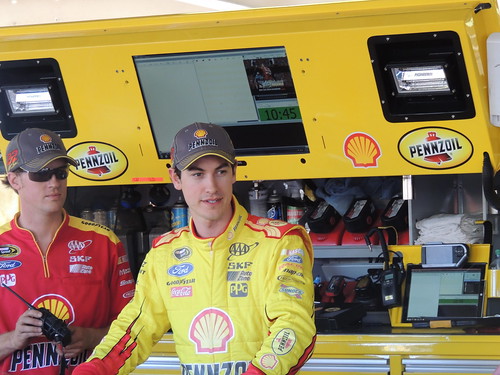 Joey Logano won Sunday’s Daytona 500 when a wreck brought out a caution just after Sliced Bread had taken the white flag on a green-white-checkered restart at Daytona International Speedway.  The victory was the first for Logano in Sprint Cup’s biggest race. In fact, the finish was his first in the top five at Daytona!

Logano held of the fast charging Kevin Harvick in the green-white-checkered finish to win the 2015 Daytona 500, conquering the most prestigious race in NASCAR.  With this Daytona 500 victory Logano is all but assured a spot in the 2015 Chase, taking another step toward validating the promise and expectation that have defined, and sometimes dogged, his racing career since his early teenage years.

A multicar wreck involving the soon to be “retired” Jeff Gordon erupted about one third of the way down the back stretch on the final lap of the first attempt at a green-white-checkered finish prompted a yellow flag, as Logano steamed into turn #3.  That yellow flag froze the field, ended the race, and allowed Logano to notch his very first Daytona 500 victory.  Listening to his team frequency, there was joy, excitement, and an element of disbelief, all at the same time emanating from Logano!

It was obvious to me, from my seat in the Sprint Tower, that Logano was going to be a force to contend in the Daytona 500.  The No.22 ran with “the big dogs” for the entire 200 laps, never falling out of the top 10 all day.

As we all know, the restrictor plate races of Daytona and Talladega are known for the calamity that almost always features “the big one”. This year’s Daytona 500, however, featured concise driving skills, precision racing, and civility among the 43 race car drivers! As proof of that, there were only eight cautions during the 500 mile race.

The final caution and red flag flew with just five laps left in the scheduled 200 lap race. Logano led when Justin Allgaier spun on the front stretch setting off the green-white-checkered mad dash for all the marbles.  When the wrecks were cleaned up, the cars were fired, and the green flag flew, it was time for the drivers to “get up on the wheel” and “let the big dog eat”!

As it turned out Sunday, Joey Logano was “harder to pass that a kidney stone” in those final three laps!  Therefore, Joey Logano is the new owner of the Harley J. Earl Trophy for his Daytona 500 victory, more than likely a spot in the 2015 Chase, and now the owner of a cut in the very fat paycheck totally $1,581,453.00 for his 4 hours of work Sunday!

Is Joey Logano now worthy of the nickname of Slice Bread?  The answer to that question is yet to be totally answered, because one big race does not define a driver’s career.

However, Sunday Logano was most definitely The Bread Winner!