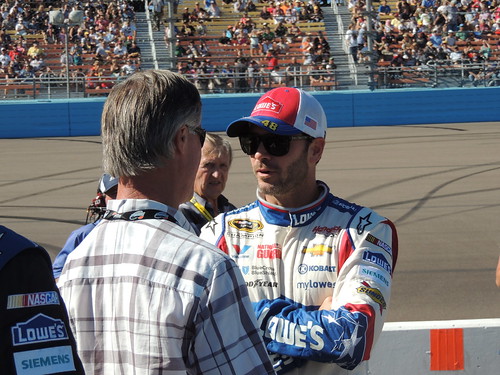 Jimmie Johnson survived an explosion of late-race cautions and restarts to win Sunday’s Folds of Honor Quik Trip 500 race at Atlanta Motor Speedway.  The victory was the 71st of the six-time champion’s career and came in start No. 473.

Johnson, who didn’t pick up a victory in 2014 until the fourth month of the season, got his first win of 2015 in race No. 2. That means he will likely make the Chase playoffs once again.

Johnson, who didn’t pick up a victory in 2014 until the fourth month of the season, got his first win of 2015 in race No. 2. That means he will likely make the Chase playoffs once again.

“I think it is pretty much a lock as long as we have a smooth season,” Johnson said of the Chase. “I think if we win a second one, it is definitely a lock. But this takes a ton of pressure off.”

Johnson had a 1.8-second lead over Kevin Harvick when a yellow flag waved with just over 25 laps to go.

Johnson, Harvick and other top-10 drivers pitted under yellow. Matt Kenseth did not and assumed the lead. Also not pitting were Clint Bowyer and Brett Moffitt. Johnson started fourth and Harvick fifth.

Johnson made quick work of Kenseth and took the lead back – until a big wreck brought out another yellow with 21 laps to go brought out the yellow again. A lap of yellow later, the red flag waved.

On the restart, which came with 14 laps to go, Johnson, Earnhardt and Harvick jousted for the lead but Johnson finally emerged and then began to pull away from Earnhardt, who pulled away from Harvick.

“We got the restart we needed to, cleared the 88 (Earnhardt) and off we went,” Johnson said.

That was an understatement by Jimmie Johnson!

The new rules package of less horsepower and less downforce may be right back into the ol wheelhouse of Johnson and Knaus this year! Don’t be surprised to see this duo regain their five year dominance once again!

Check out the unofficial results of the Folds of Honor Quik Trip 500.