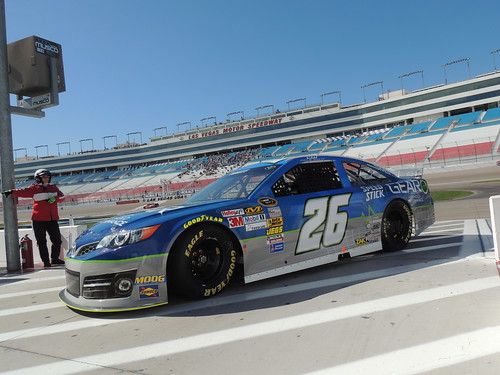 Last year Cole Whitt had a very rocky, roller coaster Sprint Cup experience.  Within just a few weeks, the middle of April to be accurate, Xxxtreme Motorsports, for whom Whitt was driving for, sold the race team’s assets to BK Racing and folded up shop!  When that transaction was complete, Whitt found himself with a new employer and driving a third car for a slightly under-funded BK Racing.

Over the offseason there was the leaked out Twitter message from the owner of BK Racing congratulating Whitt for gaining employment driving the No. 34 Front Row Motorsports Ford Fusion.  The only problem was the message indicated that Whitt was going to drive the Front Row Racing No. 34.  Unfortunately that car was, and is still driven by David Ragan!

That was a gigantic faux pas!

Front Row Motorsports has just announced that the team will expand to three race cars, with Cole Whitt driving the new No.35 Ford Fusion!

So now it is totally official that Cole Whitt will expand the Front Row Motorsports racing stable to three full-time cars in 2015.  Whitt will be piloting the No. 35 Ford with support from Speed Stick for 10 races, including the season-opening Daytona 500. Randy Cox will also join the Front Row team to continue his relationship with Whitt as crew chief.

The 23-year-old Whitt will enter his second full-time Sprint Cup Series season after progressively climbing the NASCAR racing ranks of the Nationwide, Camping World Truck and K&N series. The Alpine, Calif., native made his transition to stock cars after an early career in open-wheel racing, which included a 2008 USAC National Midget championship.

Speed Stick is also on board to support Whitt during his sophomore season. Speed Stick®, known for its line of high-performing antiperspirants and deodorants, previously sponsored Whitt during his rookie year and connected with fans by documenting the driver’s first race at the Daytona 500 through a unique, online video series.

Additional Speed Stick brand sponsored races this year will include high-profile events such as the Talladega Superspeedway race in May, the 600-mile event at Charlotte Motor Speedway, the Brickyard 400 at the famed Indianapolis Motor Speedway, and the Bristol Motor Speedway Night Race.(Front Row Motorsports)