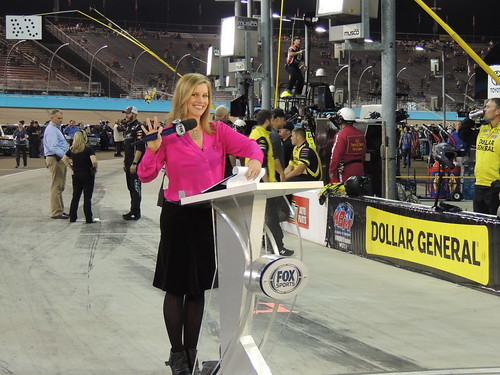 ESPN’s affiliation with NASCAR, providing coverage of the second half of the season’s Sprint Cup Series races as well as the entire 33-race Nationwide Series schedule, came to an end earlier this month at Homestead-Miami Speedway. ESPN had been a television partner for the sport since 2007 and overall, had been involved in NASCAR coverage for 28 years!

The cable sports giant is not part of NASCAR’s most recent broadcast package that officially begins in 2015. FOX Sports will air the first 16 Sprint Cup Series events while NBC Sports will handle live coverage of the final 20 races .

Coverage of the XFINITY Series (previously Nationwide) will also be split between the two networks while FOX Sports will carry coverage of NASCAR’s Camping World Truck Series.Many of the faces that fans have grown accustomed to seeing on ESPN during NASCAR events will still be seen next year. Some will still be affiliated with motorsports, others will not.

The ESPN team of Allen Bestwick, Dale Jarrett, and Andy Petree will no longer be calling the NASCAR races in 2015.

Bestwick will remain in the booth, however, he will be serving as the lead announcer for the Indianapolis 500, and ESPN’s association with the IndyCar Series. He will also be involved in college football and basketball, pro tennis and golf coverage.

Dave Burns, Jamie Little, Dr. Jerry Punch and Vince Welch, all served as pit reporters for ESPN. Burns will join NBC Sports next season when that network begins its Sprint Cup affiliation while Little will move over to FOX Sports as a pit reporter.

Welch has worked the IndyCar series as well for ESPN and could possibly resume those duties. Jarrett, the 1999 premier series champion, Petree and Punch have not announced their plans for 2015 and beyond.

Former driver Ricky Craven and reporter Marty Smith will remain entrenched with the Bristol, Connecticut-based network and tethered to NASCAR.Craven, lauded for his no-nonsense approach and knowledge of the sport, will continue to serve as the lead in-studio NASCAR analyst. Smith, based in Charlotte, will also report on the series, but also will be assigned to other sports such as college and pro football like that which needs Tottenham Hotspur tickets in order for fans to watch live.Those out front for the pre-race NASCAR Countdown show included host Nicole Briscoe, married to IndyCar driver Ryan Briscoe, former NBA basketball star, Brad Daugherty, and 1989 NASCAR Sprint Cup Series champ, Rusty Wallace.Briscoe will move into the role of an anchor for SportsCenter starting in January ,and is expected to do other in-studio work as well.Daugherty, the former NBA standout and who currently co-owns the JTG Daugherty Racing Sprint Cup Series team, will transition to ESPN’s coverage of college and pro basketball.Wallace, like Jarrett a member of the NASCAR Hall of Fame, has not announced his plans for next season.

NBC Sports will begin its portion of live NASCAR race coverage at Daytona International Speedway in July of 2015 with the Coke Zero 400. In addition to Burns, former ESPN reporter Mike Massaro will join the group as a pit reporter, along with Marty Snider and Kelli Stavast.

Krista Voda, seen above acknowledging me during a commercial break during her Camping World Truck Series pre-race show at Phoenix International Raceway in early November, will serve as host of pre- and post-race shows for NBC; Rick Allen (lead announcer), Jeff Burton and Steve Letarte (analysts) will be in the booth.

While Jeff Burton will be recognized as the former driver of the Richard Childress CAT No. 31 Chevy for the last few years, and the Roush-Fenway Racing’s No. 99, Ford prior to Carl Edwards’ tenure in that car.

An lastly, everyone should recognize that Steve Letarte sat atop of the pit box of the Hendirick Motorosports No. 88 Dale Earnhardt, Jr. race team for the last few years.

So race fans, the 2015 NASCAR season will see many changes on your TV screen, from a new TV network joining the NASCAR family, to seeing some of your favorite personalities move on to either a new network, or moving on to new assignments within their current network, as the new NASCAR TV contract phases itself into our living rooms!