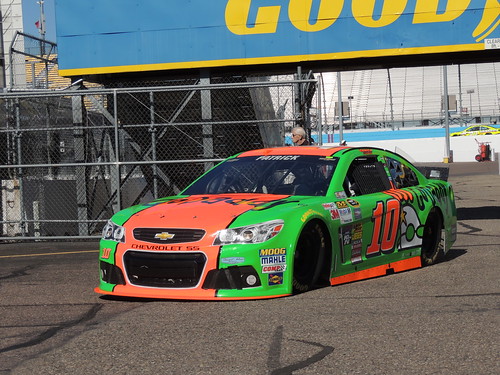 What will the future hold for Danica Patrick?  Will she kick it up a notch and bring home better finishes in 2015?

Let me start of by saying that Danica is a talented race car driver. She couldn’t have had made it this far without knowing how to drive a race car.

But the reality is we have to be honest and the fans have to face the music. Danica has 82 career Sprint Cup series starts. That equates to the partial 10-race schedule that she ran three years ago, plus now full two seasons. We also know she has had competitive equipment. She has access to the same resources that her teammate Kevin Harvick has.  Harvick won five races and the championship this year for Stewart-Haas Racing.

To try to stir up things at Stewart-Haas Racing near the end of the season, Stewart-Haas Racing even went so far to swap Danica’s crew chief, Tony Gibson, her guys and equipment with her teammate Kurt Busch. In just three races with Danica’s former cars and crew, Busch put up a top 10 at Texas, a top 10 at Phoenix and sat on the outside front row at Homestead in qualifying. To me that’s as big of a measuring stick as we need.

Trust me, the powers-to-be at NASCAR  desperately wants Danica to become more competitive and successful, but when you already have 82 starts and are at best delivering four top-15 finishes, well I just don’t know what the future will hold for her and the team..

Maybe this new rules package for 2015 will fall right into her lap and be what she needs.  However, I just think coming from the open-wheel ranks, where downforce is king, taking downforce away, as this new 2015 package is designed to do, simply will not give her the desired help that is required for her to be more competitive!

One of the biggest differences between IndyCars versus stock cars is the huge amount of downforce of The IndyCars possess versus the much smaller amount of downforce that Sprint Cup “door slammers” have. So while I would like to hope that next year will be a brighter one for Danica in the NASCAR Sprint Cup series, I simply do not see that her performances will get any better than what we have seen over the past 82 races!

Additionally, her contract with Stewart-Haas Racing runs out at the end of the 2015 season.  Will that signal the end of the Danica Patrick-SHR relationship?  Will she and GoDaddy.com negotiate with SHR?  Will another quality Sprint Cup team sign her to a contract at the end of 2015?

The answer to these question and many more will be answered in about 12 months!