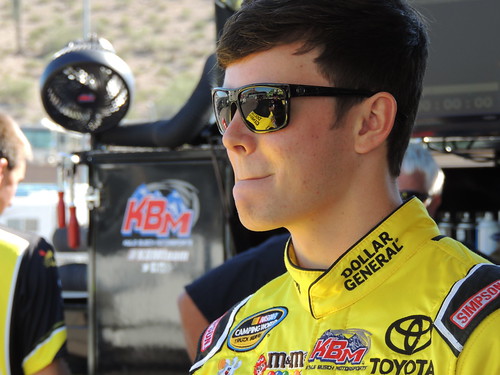 Even though Kyle Motorsports has been the dominate team in The Camping World Truck Series for the last three or four years, including a couple of owner’s championships, Kyle Busch probably won’t expect a repeat in 2015, in spite of the team’s 2014 results, 14 wins in 22 races.

But Busch will continue a transition by putting more younger drivers in his Kyle Busch Motorsports trucks next year, as he will drive just four of the 22 events, and increasing the size of KBM, fielding three full-time trucks instead of two.

Busch will put Erik Jones, who won three races last year, in his flagship KBM No. 51 Toyota Tundra full time, thanks to the help of sponsor Toyota.

He then will have a second truck full time for the funded Justin Boston, and another truck he will split with Matt Tifft (six races) and Daniel Suarez (12 races). Suarez, backed by companies owned by Mexican businessman Carlos Slim, will run a full Xfinity (formerly Nationwide) Series schedule next year for Joe Gibbs Racing and the KBM truck. Tifft also was able to bring some funding.

“Obviously you’ve got to do what’s right for business and when somebody comes to you with money, you take a look at them and you decide whether you want to work with them or you don’t,” Busch said about Boston and Tifft.

“Looking at their past successes that they had, it made sense. They’ve had success. They run good. They’ve been consistent. … You try to see if you can’t help them out and make a deal and move them up and see what their success can be like at the next level.”

Boston was the top rookie in ARCA in 2013 and was ninth in the stand-alone Nationwide race at Kentucky this past year. Tifft was eighth in the Martinsville truck race this year. And Suarez has won 13 races in NASCAR regional series, including 10 in NASCAR’s series in Mexico.

“Obviously you’ve got to do what’s right for business and when somebody comes to you with money, you take a look at them and you decide whether you want to work with them or you don’t,” Busch said about Boston and Tifft.

Jones can certainly win truck races. He won three last year in just 12 races in the truck that he shared with Busch, a truck that won the series owners title.

“Jones is a rare breed,” Busch said “He is going to make it on his talent, not on money. That is hard to come by these days.”

“I don’t expect our group to be able to win as many races as we did this year next year,” Busch said. “I still expect us to run well and compete, and for Erik Jones to be able to have a legitimate shot at a championship and to be able to run consistent each and every week.”

It will be very interesting to see if Erik Jones can fill those large driving shoes that are sitting on the floor board of the KBM No. 51 Toyota Tundra in 2015.