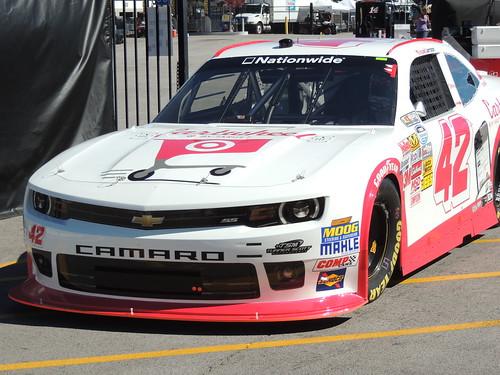 TSM is co-owned by Steve Turner and Harry Scott, Jr., who also owns the HScott Motorsports NASCAR Sprint Cup Series team that fields cars for rookie Justin Allgaier. Sources speaking on the condition of anonymity say that an ownership dispute between Turner and Scott could result in the team shuttering all or part of its multi-truck NASCAR Camping World Truck Series operation, effective immediately.

Sources say that only Kennedy’s Chevrolet may continue to compete, but that at least some of the team’s transporters have been called back to TSM headquarters in Mooresville, NC. Turner Scott also fields NASCAR Nationwide Series entries for drivers Dylan Kwasniewski and Kyle Larson.

The team was founded by Steve Turner for a part-time schedule of Truck Series events in 2009, before expanding to two full-time entries the following season. Turner Motorsports won the Camping World Truck Series championship with Steve Turner’s son-in-law, James Buescher in 2012.

Calls placed to Turner Scott Motorsports, Steve Turner, Harry Scott, Jr. and others in search of comment were not immediately returned. In a brief text message, Turner Scott Motorsports co-owner Harry Scott said only that “What’s been reported is not true.” Several employees of TSM have confirmed that they were laid off — at least temporarily — at approximately 3 PM ET Wednesday.

“Turner Scott Motorsports remains in operation and will compete in this weekend’s NASCAR events. TSM’s NASCAR Nationwide Series race teams represented by the #42 driven by Kyle Larson and the #31 driven by Dylan Kwasniewski will complete this weekend as scheduled at Atlanta Motor Speedway.

“The #31 driven by Ben Kennedy and the #32 driven by Cameron Hayley in the NASCAR Camping World Truck Series will compete as scheduled at Canadian Tire Motorsport Park this coming Sunday.

On first look this appears to be nothing more than an ownership struggle and split between Steve Turner and Harry Scott, Jr. Hopefully, the split will not cause the operation to shutter completely.  Although, this weekend it has put the series leading winner, Ron Hornaday, on the outside looking in without a ride. With this race organization being strong in both Nationwide and the Camping World Truck series, it could have a negative impact very quickly and upset the balance of power in both of those series.