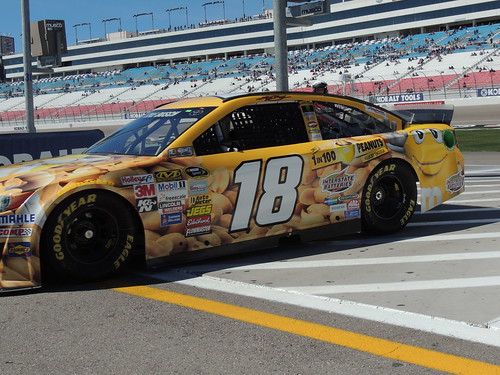 Was it simply heat-of-the-moment comments after a frustrating night, or signs of a growing rift between Kyle Busch and crew chief Dave Rogers?

Late in Saturday night’s NASCAR Sprint Cup race at Bristol Motor Speedway this was the radio exchange between the Busch and Rogers:

Rogers responded: “Park it behind the truck and take your whiny little ass to the bus.’’

After the race, Rogers explained the situation to Fox Sports 1.

“Just a frustrating race,’’ Rogers said. “Tempers flare at Bristol. The bottom line is we’ve had really fast racecars the last four or five races and we’ve just come up short. The whole team is all frustrated.

“Kyle was trying to communicate to me what was wrong with the car. I couldn’t hear. It just led to more frustration. We came back here to the truck and had a great talk. You look at things like this as a negative and negatives create positives if you look at them the right way. We got to air things out and had a great talk. I think we’re going to be better going forward.’’

Car owner Joe Gibbs did not express concern about the radio conversation between Rogers and Busch. It was a tough night for the team. Busch was penalized for speeding on pit road and collected in a crash that ended any chances to win before the race had reached 140 laps.

“I think it was just one of those things where it heated up,’’ Gibbs said. “I think they handled it the right way, they went and had a good discussion.’’

“I think it was typical thing that happens in sports. Guys get heated. They had a frustrating night and had a real good car and thought they had a chance to win it. So, it all adds up. Then you have a situation like that. I’m kind of used to it. It does happen. They just talked it over.’’

As has been the history of Kyle Busch’s Sprint cup career, as the summer temps begin to decrease, and the onset of Fall approaches, his charge for a championship seems to sputter.

As I have said in the past few years, it appears that just like the trees in the Fall, the leaves are beginning to fall off of this Busch!