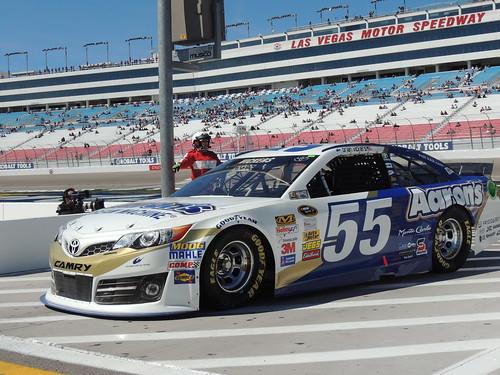 NASCAR won’t change the formula for how it distributes television money from its current split among tracks, teams and the sanctioning body when its new television deal kicks in next year, a deal that likely will be worth nearly 4 percent more in 2015 than in 2014.

In a news release to announce the impact of the schedule changes, and the new 10-year television deal that goes into effect next season, track operator International Speedway Corp. said the split will remain at 65 percent to the tracks, 25 percent to the teams through the purse, and 10 percent to NASCAR.

ISC, a publicly traded company whose majority of voting stock is controlled by the NASCAR-owning France family, is obligated to tell investors some details about the deal because it is the biggest revenue stream for ISC.

For 2015, ISC said it will take in 3.8 percent more than in 2014 from the NASCAR television package with the amount increasing 3-5 percent each year at an average of 3.9 percent per year. The new package reportedly is worth $8.2 billion over 10 years, up 46 percent from the eight-year, $4.5-billion deal that ends after this season.

The distribution among the industry stakeholders staying the same is no surprise. NASCAR Chairman Brian France had indicated it would stay the same, and the tracks had said they expected it to remain the same.

France did say in July he was looking at changing that distribution model, with possibly the Cup teams get a little less of the cut.

Therein lies the reason that the RTA, Race Team Alliance, was formed!

Neither ISC nor NASCAR would say Wednesday whether the distribution among the three national series has changed. In past corporate filings, Dover has said 93.75 percent of the TV package went to Sprint Cup, 5.75 percent to Nationwide and 0.5 percent to trucks.

“NASCAR is continuing the process of briefing key industry stakeholders on the sport’s historic new media rights deal which is set to begin in 2015,” NASCAR said in a statement. “NASCAR has no plans to comment further until the stakeholder discussions are complete.”

Teams won’t truly know what their potential revenues will be until they know whether there are any distribution changes among the three national series and whether purses will increase or if they remain flat with the television money just a bigger portion of the purse, according to Michael Waltrip Racing owner Rob Kauffman.

“There’s nothing really to say,” said Kauffman, who also heads the Race Team Alliance of owners looking for ways to control costs by leveraging their overall purchasing strength. “The TV money is one piece of the economic puzzle. There’s the purse money that originally comes from the tracks, there’s what the third-party sponsorship numbers are, there’s a whole bundle of different things that add together that’s the economics of the teams.

“I don’t have a specific comment nor would I expect one from the RTA officially. We’re just working on our stuff.”

Purses will go up unless NASCAR requires less from the track for the purse. For its 21 Cup events (19 points races, Sprint Unlimited, Daytona 500 qualifying races), ISC said it will take in $316 million next year, including what it will then pay out as part of the purse. Using the NASCAR formula, it appears ISC will have $228 million in revenues in 2015 from the television deal.

ISC had said that the overall NASCAR 2014 deal was $630 million. Using the formula, it appears that the new deal will be $654 million as long as the distribution among the three series remains similar.(sportingnews.com)

Sounds to me like Bruton Smith’s SMI and the France family, specifically Brian’s sister, Lesa France Kennedy as President and Bill Jr.’s brother, Jim France, as CEO of ISC receives a majority of the TV revenues!

I think that the RTA will apply a significant amount of pressure in the near future to try to bring NASCAR into an agreement that would change to the distribution formula that is in existence at the present time, much to Brian France’s chagrin!