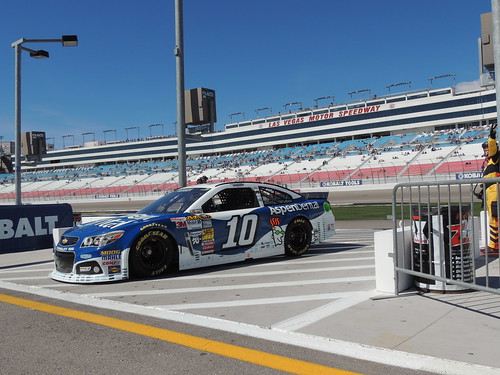 There is beginning to be some “garage noise” about Danica Patrick concerning Gene Haas’ efforts to put an F1 team, Haas Formula, on the grid by 2016, and who the prospective driver of that new race team may be.

On a weekend when a woman participated in an official Formula 1 session for the first time in 22 years at the British Grand Prix, the obvious question continues to be begged. Will Patrick be going to F1 in 2016 along with Gene Haas, the man who is trying to be the next American team owner to crack the ranks of road racing’s ultimate spectacle?

For Patrick, it’s yet another landmark opportunity to break the gender barrier in the modern era. If she can beat the other two candidates currently vying to break into F1, she’ll become the first woman to start a race in F1’s world championship since Lella Lombardi in 1976.

Before Friday’s first practice at Silverstone, where Susie Wolff drove four very unimpressive laps for Williams until an engine failure sidelined her, the last woman to participate in an official session was Giovanna Amati in 1992. But the Italian failed to make a grid in three tries ,and was cut loose from what clearly was a misguided attempt to raise sponsorship money by the Brabham team.

Would Haas be making a similar ill-fated attempt if he goes down the road of trying to bring Patrick into F1? It’s a bit more than a rhetorical question.  It could have disastrous ramifications for a new team.  With sponsorship in mind, when the Marussia F1 team decided to test the relatively experienced Maria de Villota as a potential driver in 2012, the result was an unintended acceleration type accident at an airfield track that resulted in a head injury and the driver’s death the following year.

Nevertheless, it seems very likely Haas would stand to gain from putting Patrick into his F1 car. With budgets starting at $200 million to be competitive, even a guy like Haas, who has a magna cum laude in cash flow, could use a little extra dough from sponsorship. As the endorsement on her hood at Daytona this weekend from the Florida Lottery indicates in addition to the usual Go Daddy scheme, the name Danica Patrick attracts commercial backing. And Haas, who already has a contractual relationship with Patrick through Stewart-Haas Racing, has confirmed he’s interested in having her drive an F1 car for him.

But could she be successful in F1? Can she even beat Scotland’s Wolff or Swiss racer Simona De Silvestro, who is testing with the Sauber team, to the F1 grid? That is a far more muddled picture. As for Patrick herself, she has adopted a tactical approach with the media. “I’m still working on my NASCAR career,” she says.

There are hard-boiled cynics – some are known as press box mavens – who believe a move by Patrick into F1 would be a matter of following the endorsement and money trail to the next level after moving from IndyCar to NASCAR. Yet, there’s reason to believe Patrick moved to NASCAR because it was a more likely location for her to win a major league race.  (I am no sure that I can agree with that logic.)

As the IndyCar schedule gradually moved from ovals toward one dominated by street and road races, the chances for Patrick to win a second race after her triumph at Twin Ring Motegi’s oval dwindled immensely. Her qualifying and race performances on the street and road circuits were often lackluster, at best!

It follows that F1, the fiercest road racing league in the world, could pose some real steep problems, if she were to be the driver for Haas Formula.

In F1’s pressure-packed knockout system, this tendency by Patrick to take several laps to get going could well mean relegation to the back of the grid and not much chance of success. Even worse, it could raise questions like does she belonged in the sport to begin with if the lap times were not close to competitive. The specter of the 107 percent rule also looms – where times not quick enough would exclude her from the grid.

So far, Patrick has not done well in NASCAR’s version of knockout qualifying either. (She has five top 10 starts in 18 races, not a great record!) After starting on the Daytona 500 pole in 2013 under the old format, Patrick’s first outing under knockout qualifying at Daytona resulted in a 29th place starting position for the Coke Zero 400.

Patrick’s size would be a plus in F1 in the sense that teams are looking to save weight up high in the chassis with lighter drivers. On the other hand, is Patrick’s physical size a potential problem?

There are more unresolved questions than there are answers when discussing this topic.

Nevertheless, Patrick has her business manager and father T.J. Patrick negotiating for her. If the past is prologue, the current contract with Stewart-Haas is a two-year deal with a third option year in 2015. That leaves plenty of negotiating room when it comes to how a transition to F1 could take place should Haas be able to design and build a competitive car.

But can she win in F1 after continuously struggling to get the front of the field very often in the Sprint Cup?  So far in her NASCAR career Patrick has not had many things to celebrate about, save her pole at this year’s Daytona 500.  In her NASCAR adventure Patrick has shown that she is a mere journeyman race car driver, nothing more and nothing less!

Having said all that, Corporate America is still in love with Danica Patrick!  GoDaddy.com continues to pour BIG money into her Stewart-Haas Racing team, despite the fact that she struggles to race within, and among, the top 20 each week!  It would appear that return on investment is still a large positive cash flow for that internet company.  Quite possibly, from GoDaddy’s perspective, it is not about winning races, only getting “face time” for GoDaddy!

In summary, with the huge dollar, highly competitive, atmosphere that is called Formula 1, it would seem that Gene Haas would be somewhat delirious, and grossly foolish, to even entertain the idea of putting Danica Patrick into his fledgeling F1 team in 2016!