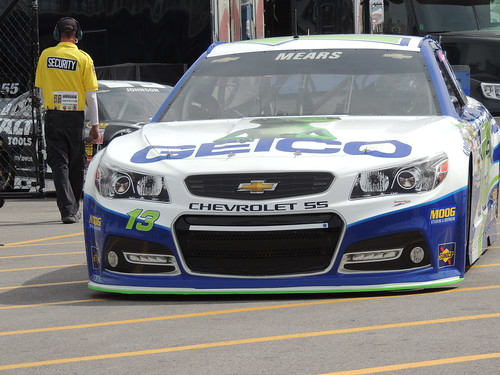 The Coke Zero 400 at Daytona International Speedway was one of the strangest races in recent memory.  originally postponed Saturday night due to rain, the race began Sunday morning.  On Sunday the race was delayed a coup;le of times due to continuing rain over the Speedway.  The race saw two massive wrecks, and in the end it was called questionably early with Aric Almirola declared the victor.

While Almirola and his Richard Petty Motorsports team were enjoying the win, a host of other teams were celebrating their own solid finishes.

Thanks in part to the uniqueness of restrictor-plate racing, along with the two big crashes, the top-15 featured names such as Casey Mears (fourth), Michael McDowell (seventh), Danica Patrick (eighth), Terry Labonte (11th), and Alex Bowman (13th).  Of this group only Patrick did not score their season’s best finish!

For McDowell, it was his first top-10 finish since the 2013 Daytona 500. For Labonte — who runs a very limited schedule — it was his best finish since running third at Sonoma in 2006. For rookie Alex Bowman, it was a career-best day, topping his previous career-best of 22nd at Auto Club Speedway.

Despite the strong runs, many — especially Mears — were hoping the rain would let up and the race would go back to racing. A true equalizer race, the underfunded teams that were able to survive the chaos hoped for a shot at the win, and ultimately making the 16-driver Chase field.

Brian Vickers, who finished second and was also looking for his first win of the season, was somewhat “shocked” at NASCAR’s decision to end the race early.

“Knowing that we weren’t even supposed to start the race last night until 7:00 p.m., I was shocked that we called it at 2:00 something in the afternoon,” Vickers said. “You know, I was expecting, I know a lot of the fans tuned into the TV and stuck around at the racetrack waiting to see a finish, and I was expecting them to wait a little bit longer knowing that we have lights here and it was going to be a night race anyway. So I was a little surprised, but then there were circumstances that maybe not so surprised that it was called early.”

NASCAR’s decision to call the race very early in the day due to rain, in spite of the fact that there are lights at Daytona, was somewhat a shocker!  Normally at racing venues that have lights, NASCAR tries, at all costs, to finish the race in it’s entirety.  Therefore, to call that race very early in the afternoon brings some speculation as to the rationale of that call.

Do you think that, because the Richard Petty Motorsports iconic #43 Ford driven by Aric Almirola was in the lead when the rain came, and that it was the 30th anniversary of the “The King’s” 200th and very last win, that maybe those two facts played a key role in the decision to call the race, notwithstanding the fact the race was past the halfway point?

Do you think that the powers to be in NASCAR weren’t thinking that this would be a really cool feather in their hat if the RPM #43 could win the race on that historic weekend?  Hmmmm…… I am just sayin’!