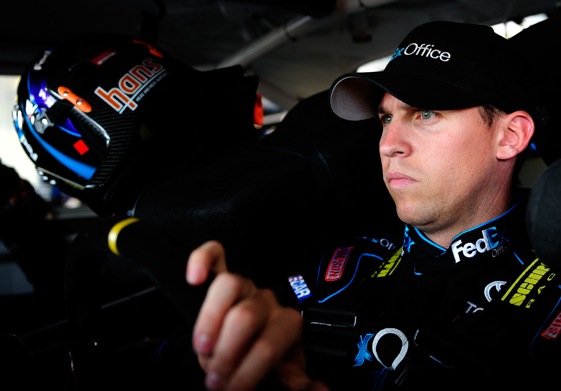 In the garage are Friday at Dover, zingers and accusations were flying like B-757’s in and out of Chicago O’Hare airport.  Those barbs were flying fast, furious, and aimed directly at Richard Childress Racing and Clint Bowyer.

Friday, both Clint Bowyer and Richard Childress professed their innocence in front of the media at Dover.  Nevertheless, Sprint Cup points leader, Denny Hamlin wasn’t buying their argument at all.  Furthermore, Hamlin claims that the #33 RCR Cheerios Chevy has been pushing the tolerances for most of the season!

“In the garage, everyone has known it for months,” Hamlin said. “It’s not two weeks old. This is something that’s been going on for months.  “They’ve been warned for a long time, way before Richmond. This is not something that, ‘Oh man, they just told us halfway after Richmond and going into Loudon that our car’s wrong.’

“They knew it was wrong way before that and I felt like they just, they wanted to get everything they could. What did they have to lose really? You almost can’t fault them for that.”

“You can talk about how small the thing was off and you can really try to say that 60-thousandths didn’t help him perform any better – that is a crock,” Hamlin said. “Let me tell you something. That helps a lot.

“I know when we gain five points of downforce our car runs a ton better. He wasn’t speeding on pit road by a half-a-mile per hour he was speeding by 5.5 miles-per-hour.

“They give you a grace period. NASCAR has been very, very lenient, I feel like, on this car and they’ve given those guys chances. I think that they should just be happy that they’re in the Chase at this point. They were warned and they were warned before Richmond. Everyone in the garage knows that.

“They’re the ones who wanted to press the issue and get all they could to make sure they got in the Chase. They got in it and then they were busted. They kept going with it.”

Kurt Busch chimed in by noting that if Bowyer’s car was near or past tolerance at Richmond the same points penalty would have knocked the #33 team out of the Chase.

“One of the scenarios that I looked at was if they had that car at Richmond that was questionable and if he would have been docked at Richmond 150 points, Ryan Newman would be in the Chase and not Clint Bowyer,” Busch said. “If I was (team owner) Tony Stewart, I’d be raising hell.”

What is your view on the Bowyer fines?  What is thoughts on the Denny Hamlin and Kurt Busch barbs?