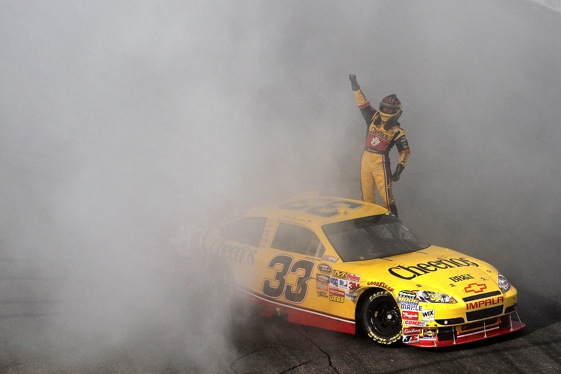 After the smoke had cleared Sunday at the New Hampshire Motor Speedway, it was Clint Bowyer who “smoked” his competitors!

However, as Wednesday’s Sun came up there was a recurrence of smoke causing a huge upheaval in the Sprint Cup garage.  Even though Bowyer’s car passed the pre-race and post-race inspections at the New Hampshire Motor Speedway, NASCAR took Bowyer’s car to the NASCAR R&D Center in Charlotte for a very extensive post race inspection.  When that inspection concluded, NASCAR levied a very big fine to the RCR #33 Cheerios Chevy.  The resulting fines were, 150 driver points, 150 owners points, Bowyer’s crew chief fine $150,000.00, and both crew chief and car chief suspended for six races.

Richard Childress Racing has notified NASCAR that it will appeal those fines, therefore the fines and penalties will not be assessed until the appeal is heard.

That fine has had a very large impact on the Chase standings, Bowyer fell from second place after his victory to the bottom, 12th place 185 points behind the leader.  More importantly, that fine has put all the race teams on edge, additionally it  has caused a certain level of discomfort from within.  All of this has been the topic of conversation as the race teams rolled into the Dover garage area Friday morning.

A very defiant Clint Bowyer addressed the media Friday morning at the Dover Media Center, expressing his concerns regarding the fine.  Bowyer posed several questions and quite possibly a plausible explanation for the infraction.  Bowyer’s more plausible explanation was that the 2 ton wrecker that had to push his race car to Victory Lane quite possibly bent the rear bumper.

We now know that the infraction was having one rear quarter panel too high.  The measurement of the infraction is .060 of an inch equals 1/16 of an inch, the width of a quarter!  It is questionable that 1/16 of an inch really gave that team ANY aerodynamic advantages at New Hampshire Motor Speedway to the RCR #33 Cheerios Chevy!

What is your take on the huge fine levied at Bowyer and the whole RCR #33 Cheerios Chevy race team?

One Comment on “The Smoke Has Cleared In Louden”