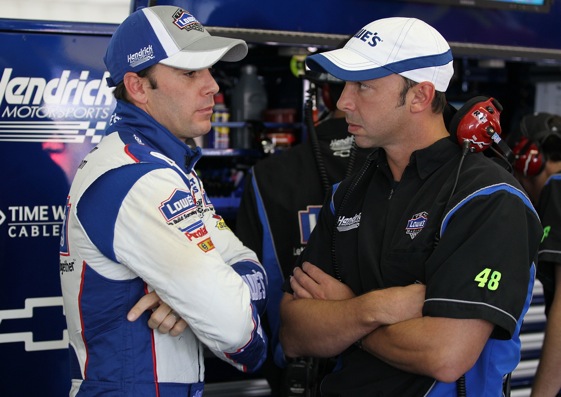 On Friday afternoon Jimmie Johnson secured the pole position for the AAA 400 at Dover International Speedway.  The four-time and reigning champion’s fast lap was at 155.736 mph. The pole was the third of the season for Johnson, who has won five races in 2010.

“This is certainly a step in the right direction for momentum,” Johnson said. “Last weekend we ran much better than where we finished. It stinks that we finished where we did but there is nothing we can really do about it and to come out this weekend and qualify on the pole just starts the weekend off on the right foot. And it really creates a good situation for us in the race having that first pit stall.

“Track position is very, very important here. It seems to be more important as each weekend and each year goes by. We just learn more about the cars and make them more equal and the aero deficit that you’re in being one position back; just one position back is enough to keep you from running the lap times you need to.

Here is the official starting lineup for the AAA 400 at Dover Sunday.

PS As Saturday’s first Sprint Cup practice session started, Kevin Harvick and Denny Hamlin had an on-track run in.  That on track run-in spilled over into the garage area and those two drivers and crew chiefs were involved in a very heated discussion.

It is speculated that Harvick was standing up for his team mate, Clint Bowyer.  Both Kurt Busch and Denny Hamlin had lambasted Clint Bowyer’s team regarding the RCR fines and penalty from Louden last week.

Is Kevin Harvick fueling a feud with Denny Hamlin?