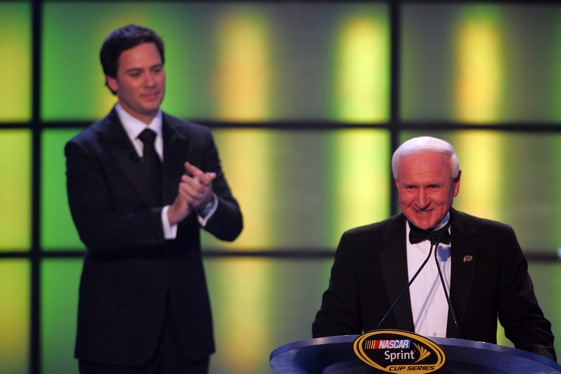 As Workingonmyredneck and every other racing affectionado has reported on the 2009 inductees into the NASCAR Hall of Fame, the critiques are running amok!

The first question to be asked has to be, “why was the number of inductees limited to a maximum of five”?   There are 62 years of history, race car drivers, car owners, mechanics, etc., to try to enlighten and enshrine.

There were 25 people who were considered for the initial induction.  Why were not all 25 enshrined?  Everyone of those first 25 who were nominated were extremely worthy of enshrinement into the Hall of Fame.  Why not make the first class big enough to make a huge statement to the sports world?

Did Bill France, Sr. and Bill, Jr. need to be installed in the very first year?  Granted, Bill France, Sr. most definitely should have been voted in on the very first class.  If he had not had that vision, nothing else would have come to fruition!  By electing Bill, Sr and Bill, Jr. in the first class, there were only 3 drivers enshrined in the first class.  Think about that, 3 drivers enshrined and there are 62 years of drivers to pick from!

Please, please, don’t get me wrong.  Those 3 drivers are very worthy of being in the first class of inductees.  But what about David Pearson, Fireball Roberts, Darrell Waltrip, Bobby Allison, Cale Yarborough, Ned Jarrett, Lee Petty, Curtis Turner, and car owner Raymond Parks, just to name a few?  Are the early legends of NASCAR going to be forgotten and lost in the rules of induction into the Hall of Fame?

With just a maximum of 5 inductees per year, the process will not allow all the worthy individuals from NASCAR’s formative years to be acknowledged in the Hall of Fame.  As each year progresses, it will become impossible to elect and acknowledge those who guided and formed NASCAR into what it is in the 21st century!

It will virtually impossible to ever enshrine all the people from NASCAR’S glorious past!  There are going to be some very important NASCAR pioneers forgotten forever with the limitation that NASCAR has imposed on the Hall of fame yearly inductees.

What is your take on NASCAR’s ruling of a maximum of 5 inductees per year?