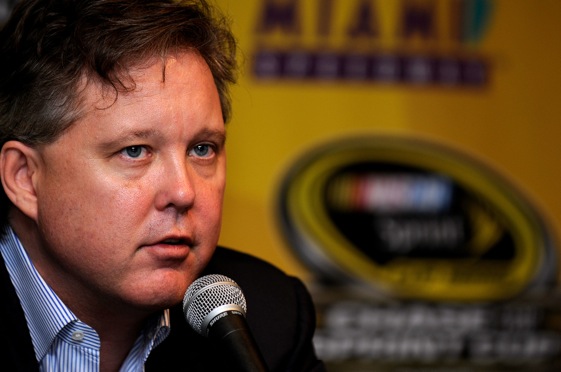 On the final day of NASCAR’s Sprint Cup Media Tour, Brian France confirmed that the much discussed changes for the series will occur.  He reiterated that the purpose of those changes are to make the car drive better.

NASCAR, France said, is a “contact sport”, and the leadership of NASCAR intends to let them “mix it up”.  “We are going to open it up”.  We want what you want”, France continued.

Those new changes were revealed at the NASCAR Research and Development Center in Concord, N.C. by series vice president of competition Robin Pemberton, and they include;

1. Elimination of the bump drafting restrictions.

2. Larger restrictor plates will be in place by Daytona.

4. Beginning with Daytona, the Nationwide teams will be limited to 15 crew members, including driver, crew chief, spotter, and seven over-the-wall crew members total.

5. Nationwide teams may run no more than two races in 2010 without using an engine sealed by series officials.

6. Camping World Truck teams will use the double-file restarts, return to traditional style pit stops, and may use the new vented fuel cans which eliminate the catch cans.

These changes stem from NASCAR’s desire to put the race back into the hands of the drivers.  France continued, “we intend to loosen up and make very good racing better”.

What is your take on the new rule changes for the 2010 season?

One Comment on “NASCAR Makes The Changes For 2010 Official”