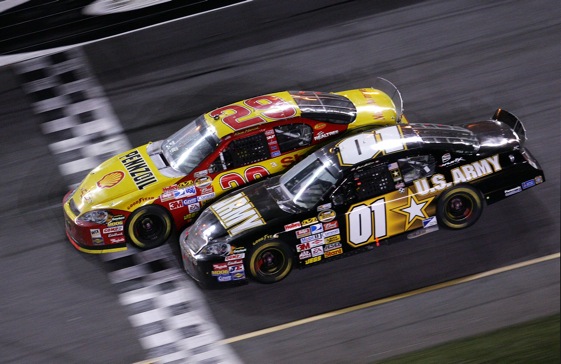 After the February 2001 Daytona 500, which resulted in the death of Dale Earnhardt, Sr., Kevin Harvick was quickly elevated to the position of “the franchise and future of Richard Childress Racing“.  That move was quickly reinforced with Harvick’s emotional win just a few races later at the Atlanta Motor Speedway in March of 2001.

However, over the last nine years the owner and driver have had their ups and downs. Throughout most of the 2009 season the entire Richard Childress Racing organization was struggling.  that is when the outspoken Harvick expressed his displeasure with RCR, and that he would be leaving at the end of his 2010 contract.  In fact they have been acting almost like a long time married couple who no longer have to stay together ” for the kids sake”!

This could make for an uncomfortable situation for the race team, a “lame duck driver” and a race team rebuilding.  But both Harvick and Richard Childress have expressed to the media that they are willing to make this all work, no matter what the cost!

However, Childress did admit that things did get a little testy in the middle of the 2009 season.  But he added that by about the Labor Day Atlanta race the race teams all began to pull on the same end of the rope.

Over the winter it appears that the whole RCR organization is now determined to turn the ship around and get back into the state of competitiveness that was there in 2008.   Childress has invested heavily in new equipment, engineering, as well as making significant leadership changes within the organization.

Nevertheless, the big rumor mill floating around the garage area is that Kevin Harvick will join Tony Stewart and Ryan Newman at Stewart-Haas Racing after the 2010 season.

Meanwhile, it is the beginning of the 2010 season, there is a Daytona 500 to be raced, and “Happy” Harvick is optimistic about his 2010 season.  In spite of all the negative rhetoric from 2009, there could still be a slim chance for the RCR/Harvick relationship to continue with another contract, but I would not bet on it!