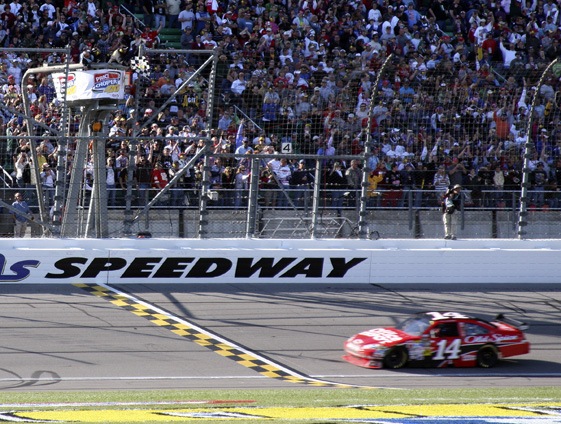 Kansas is the home of Dorothy, Todo, and the Wizard of Oz.  But on Sunday Tony Stewart made himself right at home with his fourth victory of the 2009 season.  After leading the points for the “regular season”, and kind of sputtering in the final 4 races before the Chase started, it now seems that the SHR #14 Office Depot/Old Spice Chevy has gotten itself back on track.

Even though Stewart wasn’t the dominate car Sunday, he and his pit crew rose to the occasion in the final pit stop of the race.  On that final pit stop, his crew was able to get him off pit road quickly enough to assume the lead for, what was to be, the last restart of the race.  That, my friends was all “Smoke” need to hold off the charge of  Jeff Gordon and the rest of the top five finishers.

With the culmination of the Kansas race there were four teams that have watched their chances of winning the championship go up “in smoke”!  The  #83 Red Bull Racing Toyota of Brian Vickers  is now 250 points behind the leader, Mark Martin, and their chances have all but evaporated for winning the championship in 2009.  The Richard Petty Motorsports #9 Budweiser Dodge, likewise, is 190 points behind the leader and stands an extremely slim chance of catching  Mark Martin.  Additionally, the Roush-Fenway Racing #99 Aflac Ford is 165 points behind the leader and has a slim to no chance at all of charging to the front of the pack.  Lastly, the Kansas race has dashed the hopes of the SHR #39 Army Chevy driven by Ryan Newman of winning  the championship in 2009.

Could this be the year that an owner/driver wins the championship?  It has been since 1992 when Alan Kulwicki pulled off that fete.

But where there is “SMOKE” there could be fire!!  SSSSSSSSSS!