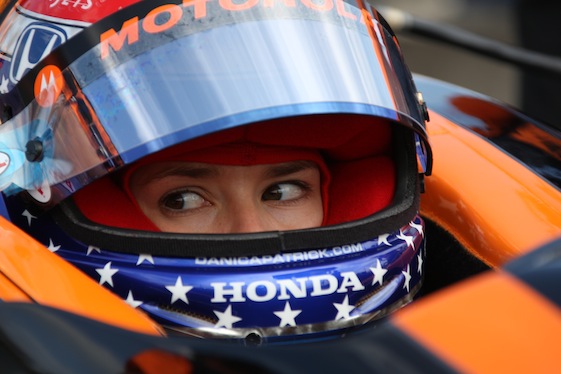 I have resisted writing articles on Danica Patrick, her contract negotiations, and her possible foray into NASCAR.   However, I could no longer sit idly by and not voice an opinion on this media circus!

It seem that this summer there hasn’t been a week go by without some articles written about Danica Patrick and her supposedly interest in coming over to NASCAR.  She has been seen at Stewart-Haas Racing, Junior Motorsports, and just lately Micheal Waltrip Racing!

So what is all this hoopla about?  Why are the NASCAR  race teams seemingly breaking their necks to try to recruit one Ms. Danica Patrick?  What does she have that the NASCAR race teams are interested in acquiring?  Is her racing skills that deserving of all that interest?

Let’s examine those questions and try to answer them honestly.

First and foremost Danica Patrick is pleasing to the camera and the eye!  As far as her racing skills are concerned there are some questions left unanswered.  Danica Patrick races for one of the premiere racing teams in the Indy Racing League, Andretti Green Racing.  That organization has won many IRL races and a couple of championships as well.

As far as Ms. Patrick’s career goes, she has but one victory in here IRL career.  What she has really proven to be is a “journeyman” racer in the IRL.  As her racing career has progressed, her skills have not!  It appears that the more she races, the more obvious the fact that she will never win a championship becomes.  She has gone from an up and coming star to a mid-level competitor at best!

So why are all these teams expressing interest in having Danica Patrick become a part of their organization?  Why are Tony Stewart, Rick Hendrick, Dale Earnhardt, Jr., and Michael Waltrip giving her the “RED CARPET” treatment and welcoming her to become part of their company?  Why would these teams court a driver of Danica Patrick’s mediocrity when there are extremely good young talented drivers out there to be had?

I believe the questions that I have just posed are called rhetorical questions!  That is, questions asked that the answers are already known or that are intuitively recognized!

NASCAR race teams are looking to Danica Patrick, not for her driving skills, but for her marketability and sponsorship dollars that she would bring to the team!  Can we all say GoDaddy.com, which just coincidentally is a primary sponsor of Junior Motorsports #88 Chevy and next year Hendrick Motorsports primary sponsor on the #5 Chevy main sponsors!

This action is called, “BRINGING THE MONEY”!

In these lean times of sponsorship dollars, anyone who can “BRING THE MONEY” has a very decided edge in landing a racing job over a very talented driver with NO money! Witness Paul Menard, son of John Menard the mid-west home improvement magnet!  His racing skills are average at best, but daddy has a huge checking account, and therefore Paul Menard gets some good rides in NASCAR!

“SHOW ME THE MONEY!’

What are your thoughts about Danica Patrick and the possibility of trying to forge her way into NASCAR?  Do you think that she is on her way over to NASCAR in the short term future?