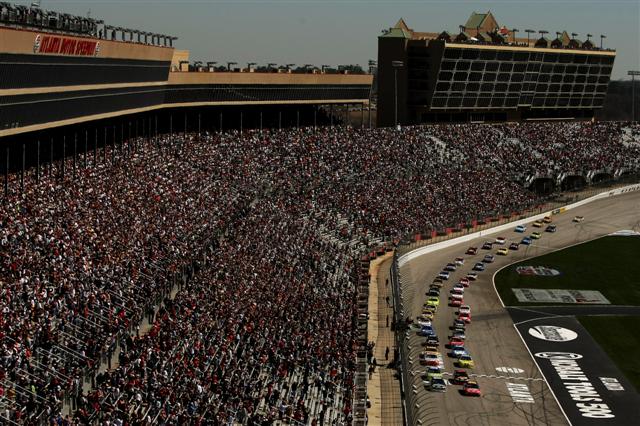 This weekend, Labor Day, marks the official end of summer by most people’s views.  But that does not mean that the temperature is turning cool!  Saturday night’s Nationwide Series race really heated up the night!  After Dale Earnhardt, Jr. set fast time in qualifying in the middle of the afternoon by bumping Kevin Harvick off the pole for the race that started at night, it was just a preview of what was to come for the Nationwide boys.

It  took Kevin Harvick’s #33 Jimmy John’s Chevy only 5 laps to take the lead away from Dale Earnhardt, Jr. and set the tone for the evening of domination.    It was the Kevin Harvick and Kyle Busch Show.  The Nationwide race for the rest of Saturday night was a “show of strength” by the  Kevin Harvick, Inc.#33 Jimmy John’s Chevy driven by Kevin Harvick.  His Chevy was thoroughly dominating all evening.  In spite of finishing in second place, the JGR #18 NOS Energy Drink Toyota driven by ol Kylie Busch ( aka The Las Vegas Weasel) at times gave the #33 Chevy of Harvick  a good race!

Since the race was ran with long  green flag runs, some of the teams had to revert to a fuel conservation mode at the end, one of those teams was the # 5 Degree V-12 Chevy of Dale Earnhardt, Jr.  For most all of the race Earnhardt hung around third place, which is where he finished when the checkered flag fell.