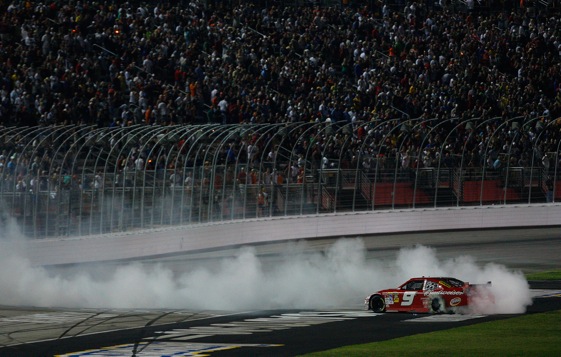 In the past, this is the time of year, Labor Day Weekend,  for all good NASCAR fans to pack up and head to Darlington, S.C. for the SOUTHERN 500!  Many would pack up their cars, their buses, RV’s, or the family pick up truck with homemade scaffolds in preparation for the trip to the racetrack dubbed “the lady in black” and “the track too tough to tame”!

However, in 2004 NASCAR took that date away from Darlington and gave it to The California Speedway (now Auto Club Speedway) for a second race date.  For the four years that the race was scheduled at the Fontana, CA facility, it was extremely hot, (I know, I was at all four of them), and the attendance had continued to dwindle.  So NASCAR  decided to shake up the schedule and swap a few dates for the 2009 schedule.  The Labor Day race was awarded to Atlanta, at least that date had been moved back to a southern race track, but not at Darlington.

The weather was warm and humid Sunday afternoon.  The Jason Michael Carroll and Diamond Rio concert, down on the track before the beginning of the race, was just a wetting of the appetite for what was to come once the Green Flag waved!  As the sun set and the lights over the racetrack brightened, the 43 meticulously manicured hot rods that were lined up on pit road, reflectively glistened.   Thunder of 43 V-8’s starting in unison signaled that, once again, it is show time in the South!

The temperature was hot, the track was slippery, and the race fans were excitedly anticipating the start of the Labor Day Weekend NASCAR race ,once again at a track in the South. A semi return to some the old time southern tradition!

There were no huge crashes that sometimes plague the high speed half mile tracks like Atlanta.  Instead, as can be the case at this track, there were several long green flag runs during the evening.  As the night wore on, there were three distinct strong cars, the #42 Target Chevy driven by Juan Pablo Montoya, the #29 Shell Chevy driven by Kevin Harvick, and the #9 Budweiser Dodge driven by Kasey Kahne.  For the last half of the race ,it appeared that the race was Kevin Harvick’s to loose.  His car would take about 10-15 laps to come into the driver, then it was off to the races!!!

As the evening unfolded, there is a caution flag thrown at lap 309.  The restart came on lap 315 of 325.  When the green waved for the final 10 lap shootout, Kahne’s restart looked like something shot out of a cannon!  It was Kahne who was to lead everyone else to the checkered flag and log his second victory of the 2009 season.