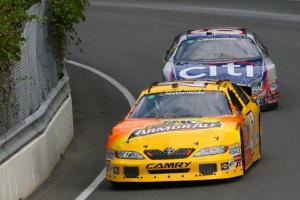 Montreal was again a test of the rain tires, as was the 2008 Montreal race, for the Nationwide Series.  On Saturday, the practice session was entirely in the rain.  However, Sunday brought a new day and sunshine to the Circuit de Giles Villenue in Montreal, or so the officials were thinking!

But as the weekend was to play out, the rain came once again with just a few laps to go.  NASCAR  made the decision to bring all the teams into the pits and “bolt on the wets”!!!  After a planned 5 minute pit stop to “rainize” the race cars, away the boys went to finish the race.  From that point it was a destruction derby to say the least! It appeared that only the top three were immune from the beatin’, the bangin’, the spinnin’, and the wreckin’ that was exhibited from that point all the way to the checkered flag!

The #47 ArmorAll JTG/Daughtery Toyota driven by Marcos Ambrose was the class of the field in Montreal on Sunday afternoon.  He dominated the entire field, all day long,  until the last turn of the race where he made just the smallest of mistakes.  But that was all it took for Carl Edwards, in his #60 CitiFinancial Ford, to pass him for the lead and the victory.

Ambrose was such a dominating race car for the entire race, it was extremely disappointing to see him overdrive his hot rod in the final turn while trying to fend of Carl Edwards’ last minute hard charge to the front.  Up to that point it was Marcos Ambrose’s race to loose!  Carl Edwards’ charge to the front and stalking  pressed Ambrose to his maximum driving ability.  That is usually when mistakes are made, Ambrose did just that and it cost him a victory in Montreal.

Just a note, I am in the process of packing up and heading to Atlanta for this weekend’s Southern 500 at Atlanta Motor Speedway!  If you look real hard I will be in the pits all weekend before both the Nationwide and Cup races.  However, during the races I will be sitting high up in the Winner’s Tower!  I’ll see you in Atlanta and……

I AM MOST DEFINITELY WORKING ON MY REDNECK!!!