Wright will make his fifth series start of the season in the Reese’s 150 and hunts his third top-10 of the 2021 ARCA season at the track he landed his career-best series finish last October.

“I am excited to get back to Kansas Speedway this weekend with Rette Jones Racing,” said Wright. “This race was not initially on our schedule, but Mark (Rette) and the entire Rette Jones Racing team have been excellent to work with this year and it’s an opportunity to go out there on Saturday night and see if I can improve on my career-best ARCA finish from last year.”

Last fall, Wright in one of his five ARCA races of the year for Chad Bryant Racing started eighth and battled to a seventh-place lead lap finish to match his best short-track finish from earlier in the season at Lebanon I-44 Speedway in Missouri.

With 100 laps under his belt, Wright is looking forward to conquering Kansas again but with the added benefit of practice and qualifying behind the wheel of his No. 30 Wright Automotive Ford Fusion.

“We’ll have slightly more track time before the race this year, but believe me all the laps help,” added Wright. “I have been fortunate enough to have some more laps at Kansas earlier this year in the NASCAR Camping World Truck Series.

“With laps and track time on my side, I’m hopeful we can have a good showing in what is expected to be a competitive race on Saturday night.”

They offer an extensive selection of new and pre-owned inventory in Pennsylvania.

Find the perfect vehicle for your lifestyle at Wright Automotive Group.

“Our car looks fantastic,” sounded Wright. “Obviously, Breast Cancer Awareness Month is important for a lot of reasons, and we’ll be doing our part by honoring three women that have fought. We’re not only racing for ourselves but for Julie Aravich, Carol Barber and Karen Nazzaro.”

Team owner and former ARCA championship crew chief Rette is excited for the opportunity to call the shots for Wright again.

“We have had a lot of fun working with Kris and the Wright family this year, but we’re not done yet,” he said. “I feel like we still have some work to do. We’ve had fast cars but for one reason or another haven’t been quite able to put together the finishes I know Kris and the team are capable of.

“Kansas is one of the tracks that Kris has the most experience on and I believe that will be a benefit for us this weekend. The field will be stacked, but I think if we can keep the handling underneath Kris and avoid any chaos, we can find ourselves contending for a top-five finish at the end of the race.

“We look forward to the opportunity to put Rette Jones Racing in Victory Lane for the third time in 2021.”

RJR is co-owned by Canadian entrepreneur and former race car driver Terry Jones.
For more on Kris Wright, please visit, kriswrightmotorsports.com, like him on Facebook (Kris Wright Racing) and follow him on Twitter (@KrisOnNASCAR). 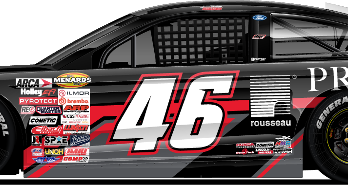