For the fifth time this season, the Go Fas Racing Mustang will flaunt a new look heading into this weekend’s event at Atlanta Motor Speedway, the first of three consecutive 1.5-mile tracks with stops at Homestead-Miami Speedway and Texas Motor Speedway following this weekend.

Superior Logistics Services returns this season as a sponsor of the No. 32 team and will be the primary sponsor of driver Corey LaJoie’s Ford Mustang at the Georgia track for the Folds of Honor QuikTrip 500.

The LaJoie and Super Logistics Services pairing had a remarkable finish last year at the 1.5-mile course of Charlotte Motor Speedway, finishing 12th in the Coca-Cola 600.

Superior Logistics Services provides shipping solutions across the continental United States, Mexico and to select points in Canada. Their local pickup and delivery services are geared towards consumer convenience and on-time delivery. Their freight audit and consultation services provide you with the tools to maximize the value of your dollar before your shipment leaves your doors.

LaJoie now heads to Atlanta as a father as he and wife Kelly welcomed their son Levi Ronnie to the world Wednesday morning. LaJoie goes into the weekend 23rd in the standings and holds an average finish of 20th.

LaJoie and Superior Logistics Services are hoping to repeat the showing they had at Charlotte last spring in Atlanta on Sunday, March 15 when the green flag waves at 2 p.m. ET on FOX.

LaJoie on the upcoming weekend:

“We always look forward to going to Atlanta. The worn-out surface makes this one of the most unique 1.5-mile tracks that we go to. Coupled with Miami next week, NASCAR fans can really look forward to some great racing. Last year we qualified 24th and we feel that we can do even better this year with the Superior Logistics Ford. We’ve had some really good runs with the Superior Logistics scheme in the past and I’m hoping that this weekend is no different.”

Corey LaJoie, driver of the No. 32 MotorTrend Ford, qualified 28th for the FanShield 500 at Phoenix Raceway and was in contention to finish in the top 20 until brake issues set him back in the closing laps where he netted a 27th-place finish.

For the majority of stage one, LaJoie remained around his starting position until a caution late in the stage for the No. 47 allowed the MotorTrend Ford to pit. Crew Chief Ryan Sparks opted to make just a two tire stop. The quick trip to pit road allowed the North Carolina native to gain multiple positions and ultimately line up 15th for the restart. As the green-and-white checkered flag flew signaling the end of stage two, LaJoie was scored 25th.

During the stage break, LaJoie brought the No. 32 Ford to the hands of the MotorTrend pit crew for four tires and fuel. He had to restart deep in the field due to speeding on pit road but worked his way up to 23rd just before a caution for the No.3 when he reported that he got a little tight during that run. LaJoie continued to power forward taking over the 21st position with 15 laps to go in the stage. As the final laps of the stage played out, LaJoie radioed to the team that he was starting off too loose and ending up too tight.

The No. 32 team kicked off the final stage in the Phoenix desert with a fresh set of tires. LaJoie returned to the attention of the GFR crew when a caution flew for the No. 20, putting him in 23rd for the resumption on the lead lap with 55 laps to go. The team made their penultimate stop of the day with 30 laps to go to tighten up the MotorTrend machine and bolt on the final set of tires. Despite sustaining slight damage and battling brake issues over the final laps, LaJoie rallied to the checkered flag to finish 27th for the final race of the NASCAR ‘West Coast Swing.’ 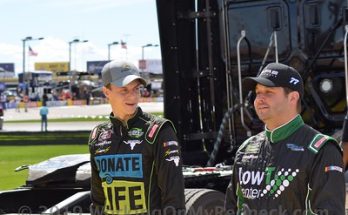