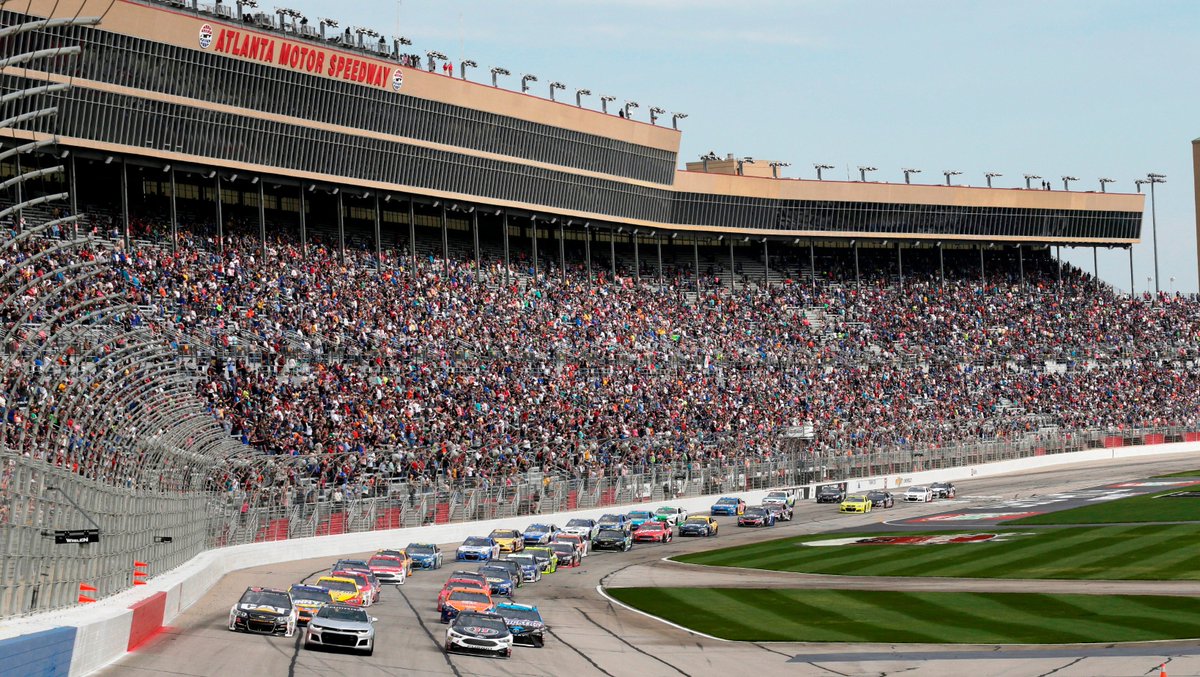 But it’s a far cry from the structure planned in 1958 by Walker Jackson, Lloyd Smith, Garland Bagley, Ralph Sceiano and Ike Supporter. Before construction of the proposed superspeedway had been completed, insufficient funds forced four of the founders to abandon ship. Dr. Warren Gremmel, Bill Boyd, Jack Black and Art Lester joined Bagley in the venture and spent $1.8 million to get the facility ready.

Ready, in this case, was a relative term.

“The track wasn’t ready to be used,” recalled Furman Bisher, then sports editor of The Atlanta Journal and a long-time sports columnist for the Atlanta Journal-Constitution. “Some of the lower seats  were so  low fans couldn’t see over the retaining wall.  The only bathroom facility in the infield was a  three-hole outhouse. There was mud all over. You talk about Mudville. Casey would have been right at home.”

When the 1.5-mile track, then called Atlanta International Raceway, finally made its debut on July 31, 1960, it became the seventh superspeedway, a paved facility of one mile or more, to play host to a Cup race. Only three of the original seven; Darlington Raceway, Daytona International Speedway and Lowe’s (then Charlotte) Motor Speedway are still in operation.

But the Atlanta track’s future was hazy in the 1960s and ’70s, when it suffered several financial setbacks. The track was reorganized under Chapter Ten bankruptcy proceedings in the 1970s and went through

several general managers before settling down with Walt Nix, who served as general manager for much of the next two decades except for a brief period when NASCAR president Mike Helton was in charge.

Even through the financial difficulties, Atlanta had attracted the attention of key local figures and celebrities. While running for governor of Georgia, Jimmy Carter, an avid race fan and former ticket vendor at the track in the ’60s, promised a barbecue dinner at the governor’s mansion if he won. He kept that promise, then improved on it by inviting the racing community to another cookout in 1978; this time at the White House.

Despite the great racing and national attention, Atlanta International Raceway was still a meager facility struggling to get by.

“It was just the Weaver Grandstand and wooden bleachers on the backstretch,” Former Atlanta Motor Speedway ticket manager Frances Goss recalled. “Fans would bring blankets and sit on the dirt bank.”

Bruton Smith changed all that when he purchased Atlanta International Raceway on October 23, 1990, and renamed the facility Atlanta Motor Speedway. A year later, the addition of the East Turn Grandstand expanded the seating capacity by 25,000, and the 30 suites that rimmed the top gave new meaning to the word “luxurious.”

Under Smith’s stewardship, Atlanta Motor Speedway not only has undergone massive expansion, but it has dramatically increased its menu, hosting everything from Busch Series, ARCA, Drag Racing and Indy car racing to dog shows, concerts and business conventions.

In 1994, Tara Place, the nine-story building that houses 46 luxury condominiums, Tara Ballroom, the speedway office complex and more luxury suites opened, as did the adjacent Tara Clubhouse and its accompanying swimming pool and tennis courts with tennis racquets. A year later, the Earnhardt Grandstand opened, and in 1997, the great transformation was completed. The Champions Grandstand was added, and the total of  luxury suites was increased to 137. When the Champions Grandstand was built, the start/finish line was moved from the west to the east side of the track, and two doglegs were added to the frontstretch to form a 1.54-mile quad-oval, which replaced the original oval. New media facilities, garages and countless fan support buildings were added to what has become a modern motorsports palace.

Sitting atop the Winners Grandstand is a public suite called Club One. Limited to just 1,000 occupants, the exclusive club offers a climate controlled vue of the entire track as well as a rooftop sight and sound observation deck.

“Bruton told me before he ever bought the track, ‘I’d like to see what could be done with this place,'” Goss recalled. “He’s made it. I never would have believed Atlanta Motor Speedway would look like it does today.” (AMS PR)

For those of you who fail to understand the connection with the name Tara Place, Tara Ballroom, Tara Clubhouse, and the Atlanta Motor Speedway, I will explain.  Margaret Mitchell wrote “Gone With The Wind” in 1936.  Tara was the name of the plantation where Scarlett O’Hara lived, and was located in Clayton County Georgia.  The race track sits just over the Clayton County line in Henry County Georgia, in the town of Hampton.

I looked it up so that you wouldn’t have to!