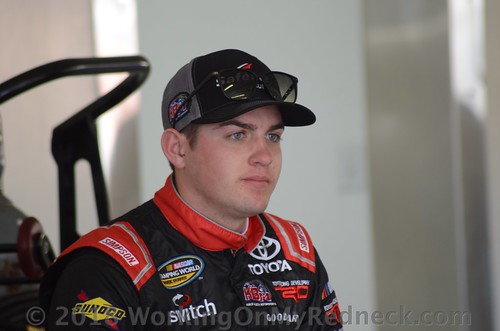 Gragson was forced to sit out the July 28 event at Pocono Raceway because of illness. Even though he received a medical Playoff waiver from NASCAR, the experience of watching Erik Jones drive the No. 18 Kyle Busch Motorsports Toyota Gragson was supposed to drive was not one he was eager to repeat.

That and a refresher meeting with a sports psychologist Gragson has been seeing prompted the 20-year-old from Las Vegas to start molding his life in the image of a champion.

“I started having a set bedtime, going to be early, waking up early,” Gragson said on Tuesday during a Playoff preview at FOX Studios. “Just trying to be more productive with my Monday through Friday schedule, trying to be more organized, trying to have a structured schedule, going to the shop, working out, trying to eat healthier, doing everything it takes to be a champion, going that extra mile.

“That’s what I’ve been trying to focus on, just doing that. It’s been a big change for me. I don’t know if that’s what you need to do for a championship, but I’m not going to let it be ‘Oh, I didn’t win the championship ship because of…’ I want to do everything within my power.”

Gragson has been working with a psychologist who specializes in helping athletes realize their potential.

“He’s been teaching me the mind-set to be a champion,” he said. “Working with him throughout this whole year, I started out really good, and then we had a refresher. And when I met him for the refresher, we kind of hit on some more stuff and going that extra mile.

“Just being able to work with him has been a really big eye-opener. I don’t think I’d be in the position I am right now if it weren’t for working with him at the beginning of this year and all through the year. He’s really changed my mind-set, for sure.”

For the eight NCWTS contenders—Johnny Sauter, Brett Moffitt, Justin Haley, Ben Rhodes, Grant Enfinger, Stewart Friesen and Matt Crafton in addition to Gragson—the first elimination round of the Playoffs is set to begin Aug. 26 on the road course at Canadian Tire Motorsport Park. After subsequent first-round races at Las Vegas and Talladega, two of the eight drivers will be eliminated.

To make it through the round, Gragson will have more than a sports psychologist to help him. He’ll also have champion crew chief Rudy Fugle.

“He knows what it takes to get the job done at Homestead and how to prepare the young drivers,” Gragson said. “He’s really prepared me.”