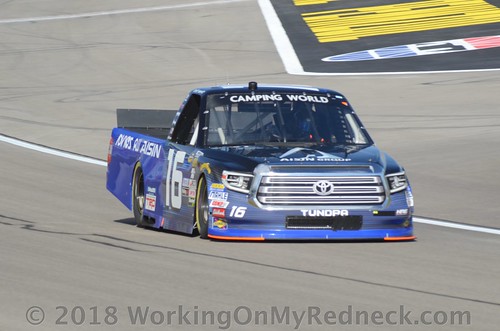 Four regular-season victories and the second seeding in the NASCAR Camping World Truck Series Playoffs is a monumental accomplishment for any team.

But for driver Brett Moffitt and his Hattori Racing Enterprises team, the feat is particularly noteworthy because of the relative lack of resources the organization has at its disposal.

Team owner Shigeaki Hattori has been raising sponsorship money on a race-by-race basis. As the NCWTS Playoffs approach, two of the postseason events—at Talladega and Texas—remain in inventory. Despite the uncertainty of funding, Moffitt has put himself in an enviable position entering the first elimination round.

The 26-year-old driver is proud of his team’s success—justifiably so.

“Everyone on our race team has a lot of pride, and they wear their hearts on their sleeves for the team,” Moffitt said. “They’re really passionate. And to see all their hard work pay off, and my hard work pays off, it’s really special for our group.

You would think with four victories this season there would not be a sponsorship problem with this team.  Surely some companies would jump onboard for the Playoffs!