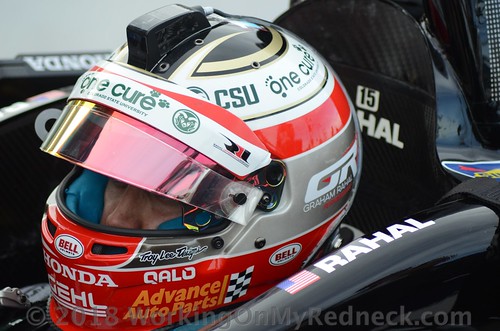 The ABC Supply 500 will be Graham Rahal’s sixth race at Pocono Raceway.  Rahal’s highest start is fifth in 2015 and his highest finish is 9th last year although he has run in the top-five all but two races.

In 2017, he started seventh, was running fourth near the halfway point of the 200-lap race and later restarted the race in second place on Lap 118 and swapped the lead with Tony Kanaan repeatedly the rest of the stint although he was only credited with nine laps led due to leading many laps in the back of the track but giving up the spot before the start/finish line.

After his fifth stop on Lap 151 he returned to the track behind Kanaan and Marco Andretti, who passed him in the pits.  Right after that, he ran three-wide with Carlos Munoz and Helio Castroneves but backed out to avoid contact.  After that, a group of cars was able to carry momentum around him and he ran 13th.  He climbed back up to ninth place, which he held for the final 10 laps.  In 2016, he started 11th, ran as high as fourth and finished 11th.

In 2015, he entered the race second in the point standings and started fifth.  He ran in the top-eight until a fueling problem on his second pit stop dropped him to 20th place. On Lap 66 of 200, he was in 16th place on a restart and got a run on Justin Wilson and pulled inside him on track. They were two-wide until Tristan Vautier decided to dive low inside, partially on the track, and make it three-wide. Vautier made contact with Rahal and spun the two into the wall.  Both were checked and released from the medical center.  The DNF in 20th place hindered his title bid after having entered the penultimate race in second place and only 9 points behind leader Montoya who finished third and increased his lead to 34 points entering the double-points season-finale in Sonoma.

In 2014, he started 14th and moved into 11th on the opening lap but his helmet pad on the right side of the cockpit flew out of the car and he gradually dropped to 19th. The helmet pad helps the drivers head stay upright while sustaining high G-Forces for 200 laps and he was unable to see as well. Once he made his first stop and the team replaced the helmet pad, he steadily climbed back up the field and ran 12th midway through the race and held the fastest lap of the race through his third stint. He was in 11th place when a problem surfaced on Lap 158/200. The car appeared to abruptly change and Rahal spun. The side of the car made contact with the Turn 2 wall and he ultimately retired in 19th place.

In 2013 he qualified 17th, started 16th due to a grid penalty ahead and finished 18th. Graham is looking forward to the race after having a competitive car here in 2017.

“Pocono is a big weekend for us. We have a lot of employees and customers of our dealerships coming out and we want to make everyone proud and have a great race. We came up short last year at Pocono so we would like to do better this year. I’m excited to get there. It’s a beautiful part of the world; it’s a great racetrack and great challenge for us. I think we will have a lot of fun.

The ABC Supply 500 will be the second 500-mile race of the season after drivers and teams gained experience at the 2017 Indy 500 with universal aero kit.  Graham and Takuma will participate in a practice session, followed by qualifying and then the final practice on Saturday before Sunday’s 500-mile race.

“With the new aero kit, I think we found some things since Indy that will help improve our performance,” said Rahal. “We had a good race car in Indy but I definitely think we have learned a lot from an aerodynamic standpoint. I expect to be more competitive.  I expect to have a faster car. If you get the balance right, anyone can run well there. Hopefully, we will make that happen. Pocono is always a competitive race. With the long straightaways, there is always tons of passing. The restarts are absolutely nuts. We’ll just have to see how it all plays out. This new car is going to accelerate really well in the draft.”

GRAHAM ON SEASON TO DATE AND OUTLOOK FOR FINAL FOUR RACES

“Our season has been pretty good in many ways. We’ve had a lot of top-10s and a lot of consistency but clearly not great season because we haven’t won and we are disappointed in that but we have four races left to get that done. I think we can be very strong in Pocono. We led there a bit last year so I think in the end we should be pretty decent. I think having two races on ovals and two on road courses is a good challenge. Pocono is obviously a very high-speed, intense place and then we go to St. Louis which is 1.25 miles, so half the distance of Pocono with really tight corners. The two ovals back-to-back will give us great challenge and I think we ought to be very good on the road courses.

Graham won the exciting 2015 500-mile race at Auto Club Speedway in 2015 and Takuma won the 2017 Indy 500.  Both agree that the approach to a 500-mile race is different from other races and plan to rely on the experience they gained en route to victory in those.

“Five-hundred-mile-races take a lot of patience,” said Rahal. “We’ve won one before. You have to understand how it all plays out. Pocono can typically be pretty green and can get away from you a little bit. We will go there, work hard and make sure we have a good solid day.”