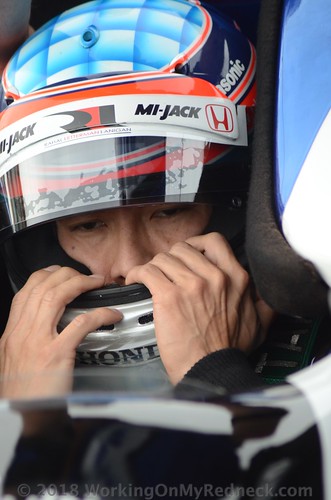 TAKUMA ON HIS 2017 POLE AT POCONO AND EXPECTATIONS THIS YEAR

This will be Takuma’s sixth race here. In his five previous races, his best start is pole last year with Andretti Autosport and his best finish is sixth in 2015 after he led three laps with A.J. Foyt Racing.  He retired with electrical failure in 2014 and contact in 2013 and 2016 while with A.J. Foyt Racing. Takuma recalled winning pole last year and expects new challenges with the universal aero kit for this year’s race.

“I knew we could be competitive but it was little hard to know how much I could commit as I just saw my sister car lose control and hit a wall heavily just before my run. So we adjusted wings accordingly and went out. It was then a little too conservative in terms of balance and I had to run wide at the exit of Turn 1 but I kept on power and got on pole. That was a really great feeling and big satisfaction. With the universal aero kit, we can achieve a similar downforce level in Super Speedway trim as we saw at the INDY 500 so we can have similar handling but to go fast, we need to reduce the drag and that means we will lose a huge amount of downforce. So it will be quite challenging but I expect we will be competitive.”

“The data from Indy should help us a lot but the configuration we had last year between Indy and Pocono was different and this year there is certainly a lot less downforce so it could be very tricky,” added Sato. “Turn 1 will be limited by understeer but T urn 3 could be very challenging as I expect the car goes too neutral but we will see.  In the Indy 500, we experienced it is extremely tough to follow or get close to the car in front so Pocono will be more challenging than previous years.  The tow effect seems big and it is a long fast straight at Pocono so it could be interesting.”

“Sure it helps any circumstances to have experience,” added Sato. “A 500-mile race is a long one so your physical and mental condition has to be strong and it’s important to work with your team very closely as there are so many pit stops as well. I am ready to compete competitively at another 500 mile race so I’m really looking forward to the weekend.”

SATO ON THE SEASON TO DATE AND OUTLOOK FOR THE FUTURE

Since Detroit, the pace and potential of the No. 30 team has gained momentum. Once luck is on the team’s side, the finishes should be strong. Like St. Pete, Long Beach, and the Indy Grand Prix, Takuma’s finishing position was greatly compromised when he was hit by another car.  Max Chilton, who was later penalized for avoidable contact, hit him while he was sixth on Lap 2 and he couldn’t recover from the unscheduled pit stop and finished 17th.  The ever-positive Sato feels that the team is on the right path to success.

“It’s been a tough season, a lot of happening outside of your control but that’s racing and we were very unfortunate from that point of view. However, it’s a great feeling that our speed and competitiveness is getting better and stronger in the second half of the season so we just need to concentrate on our job and keep positive about what we are heading to and we just need to perform well. The result will come.”