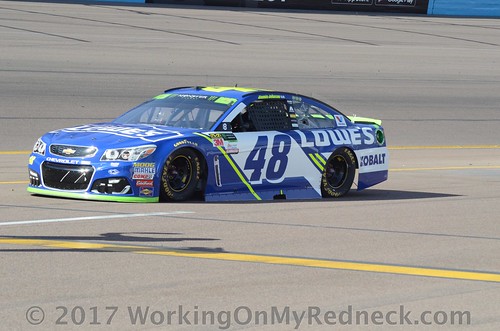 They call him “Grandpa” now.

Chase Elliott, the third of Johnson’s 20-something Hendrick Motorsports teammates, let him slide with “Uncle Jimmie.”

“OK, that’s a little bit better,” Johnson laughed. “So I guess I’m going to have to put them in time-out or something, the way that’s going. We definitely have a lot of fun together. It’s so wild. I went from the young gun. … and every time I saw my name written, it was ‘rookie Jimmie Johnson.’

Johnson, who won his last championship in 2016, has three years left on his contract with Hendrick Motorsports. Crew chief Chad Knaus, who has been with his driver for all seven of his titles, is in the final year of a deal Johnson hopes he’ll extend.

But that doesn’t add urgency to Johnson’s desire to win an eighth title that would separate him from seven-time champions and NASCAR Hall of Famers Richard Petty and Dale Earnhardt Sr.

The urgency has always been there.

“That doesn’t change anything,” Johnson said during the opening day of the NASCAR Media Tour hosted by Charlotte Motor Speedway. “My desire to be competitive, my desire to be a champion, my desire to win races has never wavered. That’s who I am. That’s what I am.

“I’m excited to have all this new stuff going on around us—from rules, internally at Hendrick, the new car (Chevrolet Camaro), my teammates. … I’m taking a notebook and pen everywhere I go, because everywhere I look, there’s something to learn, and that’s exciting.”

When Johnson won his fourth championship in 2009, veteran Hendrick teammates Mark Martin and Jeff Gordon finished right behind him in the final standings. They knew the car thoroughly, and their feedback was unfailingly reliable.

Elliott is the “veteran” of the neophytes with two years in a Hendrick car. Bowman has spent 10 races in a top-of-the-line Monster Energy Series car, all subbing for injured Dale Earnhardt Jr. in 2016, in addition to logging abundant hours in the simulator and wheel-force car.

Byron hasn’t raced a Monster Energy car yet, though he and crew chief Darian Grubb will get their first track time at a Las Vegas test Jan. 31-Feb. 1.

So much for experience—but Johnson is a glass-half-full kind of guy.

“I choose to see the positives that come with it,” Johnson said. “So, out of the gate, just knowing young guys and their raw desire to go fast, there’s a lot that we’ll be able to take away from there. And I think it’s going to be important for me to understand their language and how they describe things, and then understand how to put that into how I describe a car, the sensations I’m looking for.

“Their effort level is going to be really high, so we might get some inconsistent feedback getting started until they can dial in at 100 percent and identify with that. But I’m excited for a fresh perspective. I find myself going in a cycle of looking at what worked in different years, from a driver’s standpoint, and there’s only a few things we can do to really be prepared.

“In talking with William, just as an example, he thinks that driving an RC (radio-control) car and seeing it from a different perspective and working on your hand-eye coordination from that vantage point is helpful. I’ve never thought of that. I probably haven’t driven an RC car since I was his age.”

But that just goes to show it’s never too late for a Grandpa to learn new tricks—and perhaps to win a title along with it.