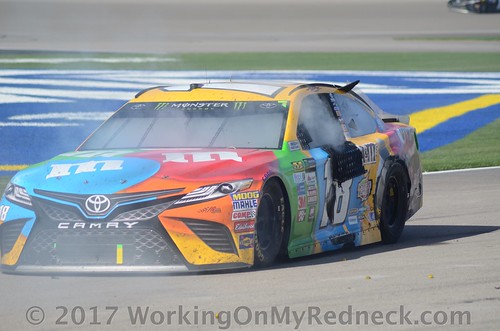 Kyle Busch made his first NASCAR Cup start 14 years ago, just before turning 19 years old. He used to be one of the up-and-coming stars of the sport, battling names such as Jeff Gordon, Jimmie Johnson, Mark Martin, Tony Stewart, Dale Earnhardt Jr., Carl Edwards and Matt Kenseth for wins and fans.

The Joe Gibbs Racing driver is now one of the veterans, and he sees marketing campaigns pushing new drivers now that many of those older guys he battled have retired.

“All you’re doing is advertising all these younger guys for fans to figure out and pick up on and choose as their favorite driver,” Busch said during the NASCAR preseason media days at the Charlotte Convention Center. “I think it’s stupid. I don’t know, I’m not the marketing genius that’s behind this deal.

NASCAR has seen a number of veterans retire in the past three years, including Gordon, Stewart, Edwards and Earnhardt — and likely Kenseth, who doesn’t have a ride this year because of a lack of sponsorship.

“We have to figure out how to fill that void somehow, and it can’t all be on the same old guys that have been there.”

The key, Bowyer said, is to promote proven young drivers.

“I get it if they deserve it. … Look at Matt Kenseth: He was outrunning them pretty much each and every week and not getting the limelight. Some of those things are bothersome at times,” said Bowyer, who finished 18th in the standings.

“Did I deserve it? I wasn’t running as good as I needed to. But if I was running up front and should have been in the limelight, I would have been barking, biting back a little bit.”

Busch conceded there could be a reason NASCAR wants to push the younger drivers.

“I guess one thing that can be said that the younger guys are bullied into doing more things than the older guys are because we say no a lot more because we’ve been there, done that, have families and things like that and want to spend as much time as we can at home,” Busch said.

“Maybe that’s some of it. But some of the marketing campaigns pushing these younger drivers is I wouldn’t say all that fair.”

Kevin Harvick, entering his 18th year as a Cup driver, laughed when asked about Busch’s comments.

“That’s like the child that’s whining, somebody who’s whining for some attention,” Harvick said. “I can’t complain about that because of the fact that our sponsors have been so involved with the things that we do. NASCAR has been very open to the things that they’re doing and involving us in it.

“I can’t back that up, to be honest with you. You have to have a push for the younger-generation guys as well in order to help introduce them to the fans. In the end, that only works if they have success on the racetrack.”