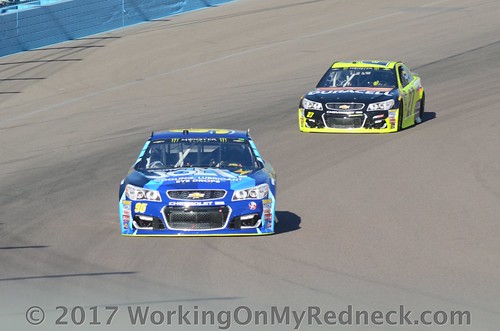 The team had a phenomenal start to the weekend, finishing first and second practice eighth and 13th, respectively. McDowell finished the first round of qualifying 11th fasteston Friday, but had a slight mishap in the second round, securing a 23rd place starting spot for Sunday’s season finale race.

At the start of the Ford EcoBoost 400, the field only made it to the sixth lap under green flag before the first caution came out for a blown engine. McDowell reported that the handling of his No. 95 Rohto® Jolt™ Chevrolet SS felt fine, but that he did not want to burn up his tires too quickly, as the fall-off at Homestead is significant. McDowell pitted for a new set during the first caution, while the majority of the leaders did not.

McDowell made his first green flag pit stop on lap 40 and controlled the Lucky Dog position for a time. He then reported his No. 95 Rohto® Jolt™ Chevy was extremely tight handling but was able to finish the stage in 21st.

Within the first 10 laps of the second stage, McDowell reported a very tight handling car and went down a second lap on lap 114. He made his second green flag pit stop on lap 132, before a caution came out just under 10 laps later, allowing McDowell to take the wave around and gain one lap back. He went on to finish the second stage in 22nd.

McDowell pitted for tires and adjustments during the caution and was able to gain a spot on pit road to start the final stage in 21st and in position to race for the Lucky Dog spot. On lap 186, McDowell reported that he felt like one of his tires was beginning to go down. He made it just seven laps before the right front tire went completely flat, forcing the team to make an unscheduled green flag pit stop, which put them down a third lap.

In an effort to not lose any more spots, Crew Chief, Jon Leonard told McDowell to save fuel, as they could make it until the end of the race without pitting. The rest of the field began their green flag pit stops, allowing McDowell to gain one lap back. As the fifth caution of the day came out on lap 229, the team was able to take the wave around to put McDowell down only one lap.

McDowell restarted in 22nd as the field went green with 34 laps remaining. While he made it back up to 20th, McDowell ultimately ran out of fuel on the last lap, crossing the start / finish line in 24th.

“Not the day we wanted,” said McDowell. “We went a few laps down there and got off sequence with strategy there. Cautions didn’t fall our way either. We struggled today just being tight, and we just lost the balance a little bit. We did all we could and got a Top-25 finish again. I’m looking forward to next year!”