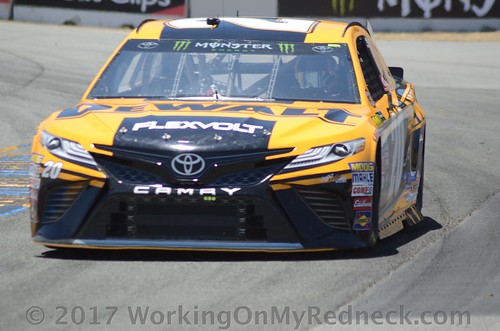 The crew in black and yellow fire suits went methodically about its business, check-listing last details before the beginning of the final Monster Energy NASCAR Cup Series race of the season at Homestead-Miami Speedway.

A few feet away, the crew in the red and black fire suits was performing the same series of tasks, but a throng of onlookers and well-wishers pressed in at every movement.

It was a surreal scene, or rather scenes, both on Sunday and 14 years ago. But in each case, the careers and personas of NASCAR’s most popular driver and his understated friend and contemporary had intersected. In 2003, it was in the garage bays in the hours before Matt Kenseth finished off his first and only championship at NASCAR’s highest level. On Sunday, it was as he and Dale Earnhardt Jr. posed for a series of photographs for friends and family beside their cars staged in Turn 4 as they prepared to undertake their final races before retirement.

Earnhardt Jr. eventually broke from his gathering on Sunday, slinked under a rope and waited through a television interview to speak with Kenseth. He’d been “adamant” Kenseth said, that their cars be parked next to each other for their moments, and was particularly intrigued that they were both using versions of their early career paint schemes for their farewells. They shared a quip and a hug and then prepared to get on with the last vestiges of their careers. In keeping with their divergent personalities – Earnhardt Jr. – compelled to accommodate the scores who wanted to share in the moment with him – and Kenseth joined the field of cars to begin the start of the race, and NASCAR’s 14-time most popular driver slowly drove pit road to exchange handshakes with crewman from other teams waiting near the wall.

Earnhardt Jr. and Kenseth have always been different people seeking the same career goals, since they entered first the Busch Series [now XFINITY Series] and then Cup together, and it can be argued that Kenseth accomplished more. Both won the Daytona 500 twice, but Kenseth claimed the 2003 championship and contended for others more frequently than his friend, who finished a career-high second in the same season. Kenseth won 39 career Monster Energy Series races, Earnhardt Jr. 26. When Earnhardt Jr. won consecutive XFINITY titles in 1998 and 1999, Kenseth finished second, and third, respectively. 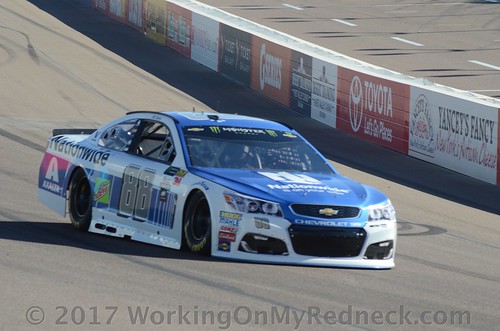 But Earnhardt Jr. always was and always will be the focus. It was his birthright and burden.  Understated and wry, Kenseth saw up close the scrutiny and demands on his friend and wanted no part of them. He learned that early. In 2002, the bachelor Earnhardt Jr. hitched a ride with Kenseth and his wife, Katie, driving back from a race at Rockingham, when they cruised into a McDonald’s. Earnhardt Jr. was inundated. Kenseth and Katie walked to the front of the line. Demands came with such fame and Earnhardt Jr. came to accept them as his part of the bargain.

NASCAR legend dictates that Kenseth’s march to his championship for Roush Racing was so banal – after winning one race he entered the final 226 points ahead of Jimmie Johnson – that it prompted the series to institute the first version of what was then called the “Chase” in 2004. Earnhardt Jr. arrived in third place, 264 behind for Dale Earnhardt Inc. and still gathering momentum as the standard-bearer of the sport and a crossover marketing star just two years after his father and namesake perished on the final lap of the 2001 Daytona 500. In keeping with the Budweiser sponsorship on his red No. 8 Chevrolet, the mood on the edge of his camp that November was festive bordering on hysterical. Such was the reason that security stations theater ropes several feet beyond the mouth of his garage bay so crewman could work and push through mobbing fans carrying gear back to their transporter. Kenseth’s crew went about its business unbothered.

Ultimately, their departures from the series were in keeping with the way they conducted their careers, or at least had them dictated to them. Returning this season after missing half of the 2016 season because of a recurrence of concussions, Earnhardt Jr. announced in April that he would discontinue full-time racing at the end of the season. A hashtagged farewell tour ensued, allowing his scores of fans and appreciative admirers to partake in his moment. Kenseth, who will be replaced next season at Joe Gibbs Racing by 21-year-old Erik Jones, refused to accept a lesser job and eventually accepted his career was over.

Earnhardt Jr. chugged a beer as a massive mob surrounded his rubber-clumped car and engaged in a long embrace with team owner Rick Hendrick after exiting the car following a 25th-place finish. Hendrick, whose son, Ricky, died with nine other Hendrick family members or employees in a 2004 plane crash, claimed Earnhardt Jr.’s helmet as a souvenir and slid away from the scene. He’d done the same in 2015 after four-time series champion Jeff Gordon’s last race as a full-time driver at Homestead and wouldn’t be without a token from someone he said he loves “like he’s flesh and blood.”

“I don’t want to get any more helmets,” Hendrick said, becoming emotional. “He and I have such a special relationship.  We were talking about it. Now we can go fishing. So, it’s unbelievable to see his driving career come to an end, but he’s excited about the next stage and I am too, We have a special bond, so we are going to do a lot of fun things together, and that’s a commitment we made this year, early on when he told me he thought it was time. I’ve turned the page now and we’re going to start planning the trip tomorrow morning.”

At the absolute end of pit road, in the quiet, Kenseth sipped on a sports drink and joked with crew chief Jason Ratcliff. It was fitting.

There is the feeling that their paths will cross again, as Earnhardt Jr. remains around the sport as an XFINITY Series team owner and NBC analyst. Kenseth, with three daughters younger than eight and another imminent said his life will become filled with recitals and sports events. In the near-term, he planned to “go up to Wisconsin and be cold.”

“That was fun,” he said of exiting alongside Earnhardt Jr., including taking a group photo with their teams on Friday. “We went for a bike ride when we were in Darlington and I told him this was going to be it, but I never really announced it just because I kind of knew by September, I pretty much had my mind was made up the way things were going and kind of knew it then. It’s kind of cool we came into Cup together and now we go out together.”

And in their own ways.

On a personal note:

What a really cool NASCAR ride the last 17 years have been with both of these excellent drivers.  Kenseth always has been a low keyed, dry witted race car driver that never really sought the limelight, but was eager to compete and win races at the highest level.  Dale Jr. had the awesome weight of NASCAR thrust on his shoulders to carry after his father’s untimely death.  But carry it he did with class and humility!

Gentlemen, thanks for allowing this person to ride shotgun in your race cars, to experience the thrill of victory and the agony defeat vicariously!  I am eternally grateful to you for your class, and humility!