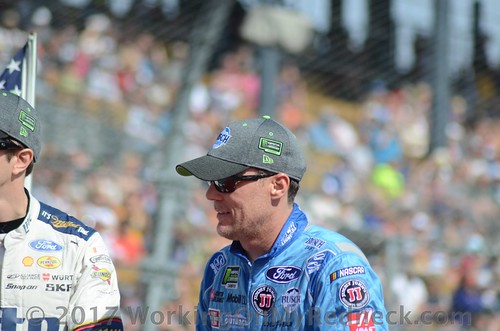 Kevin Harvick’s two wins this season are fewer than any of the other three drivers eligible to win the Monster Energy NASCAR Cup Series title on Sunday at Homestead-Miami Speedway.

His Stewart-Haas Racing team needed half a season to finally find its footing after switching from Chevrolet to Ford. Martin Truex Jr. remains the most consistent, most consistently able to strong-arm a weekend for a Toyota contingent that has been the prime manufacturer of the season.

And with reason. He’s in position for another epic close, and the title of undisputed master of this version of the points system. His record at Homestead and his performance under duress should further hearten the 2014 series champion as he readies himself for Sunday’s Ford EcoBoost 400.

Since NASCAR made the final race a four-driver showdown for the title that season, Harvick has been title eligible three times.

Harvick struggled with much of his organization to find speed in the SHR’s first two months with Ford, but was still able to maintain a slot inside the top 10 in points. His finishes began to improve markedly after winning the pole and finishing fourth at Texas Motor Speedway in June and five top-fives in eight races ensued.

“We were late bloomers to the party just from the fact we had a lot of work to do,” Harvick said, referring to the manufacturer swap. “We had a lot of change. We had a lot of things we had to navigate and maneuver and get to the point of being competitive like we are right now. That isn’t how we were in the middle of the year.”

Harvick broke through for his first non-Chevrolet triumph at Sonoma Raceway but didn’t win again until Texas two weeks ago. He was fourth in the driver standings and in possession of a points transfer spot until assuring his spot in the finale with the victory. The win bore additional value in how he was able to run down Truex who led a race-high 107 laps, has six wins this season on 1.5-mile tracks, and has been the most consistently excellent performer of the season.

“We had everything two weeks ago at Texas,” Harvick said. “I don’t have to say too much, just look back two weeks.”

In 2014, Harvick exploited the new system in the penultimate race of the season at Phoenix Raceway to leap from eighth points position to a berth in the Championship Race with a victory. His win the next week sealed the title, beginning a streak in which every champion has won the last race of the season.

“I think having that experience from 2014 and 2015 was a big learning experience for us, definitely for me being the first-time racing for a championship,” said crew chief Rodney Childers. “I think it has helped this year just being more prepared, knowing what you need to have done before you leave the shop, and just having all your ducks in a row before you get there.”

Harvick finished second at Homestead in 2015 as his title fell short against Kyle Busch, and third last year although he wasn’t title-eligible. His average finish of 6.9 in – with eight top fives – in 16 starts. Truex average there: 12.3; Brad Keselowski, 15.9; Kyle Busch, 19.8 with a win.

In the place. In the situation.