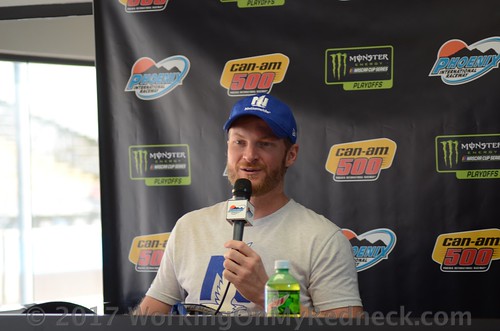 Memories of his formative nine seasons with his family team will be easily conjured for Dale Earnhardt Jr. this weekend at Homestead-Miami Speedway.

In his final race as a full-time Monster Energy NASCAR Cup Series driver – Sunday’s Ford EcoBoost 400 – the sport’s most popular figure will utilize a No. 88 Hendrick Motorsports Chevrolet with an aesthetic reminiscent of the one in which he made his Monster Energy Series debut in 1999.

A decade later, there are no regrets, Earnhardt Jr. said. But there were some decisions that he’d like to have made differently.

“One in particular … whatever the hell I was thinking when I thought that I didn’t need to work with Tony [Eury] Sr. anymore,” he said of his uncle and former crew chief, with whom he claimed 15 of 26 wins and the 2004 Daytona 500. “We had won six races in 2004 and in a matter of just a few weeks at the end of the season our relationship deteriorated and I had the audacity that I thought that I knew what was best for me at the time and make the choice – or was part of making the  decision – to work with someone else, which was ridiculous.”

Earnhardt Jr. had never won as many as six races in a season before 2004 and didn’t win another six again, total, until the 14th race of the the 2014 season. But Eury Sr. was replaced with Pete Rondeau, who had 12 previous Cup starts and Earnahrdt Jr. slumped from fifth in the points to 19th with just one race win in 2005. Rondeau was fired after 11 races, with Steve Hmiel taking over for the next 15 – helping him win at Chicago – before Earnhardt Jr.’s cousin, Tony Eury, Jr., assumed control to end the year. Eury Jr. stayed with Earnhardt Jr. into 2009, the exception being his departure for the final 14 races of the 2007 to integrate with the system at Hendrick. Eury Jr. was eventually replaced early in the 2009 season.

“I regret that,” Earnhardt Jr. said of deposing his uncle. “That’s probably my biggest [regret] in motorsports as a driver, was that decision because it did nothing and it made our relationship a challenge to repair. Like I say, we’d won a lot of races together and he had been a big reason why I even got in the XFINITY car to begin with. He was my biggest supporter and we had won so many races together.

“I don’t know what …. I got confused there a while thinking that I knew better than anyone else what was best for me.”

Eury Sr. eventually served as competition director for JR Motorsports – which is co-owned by Earnhardt, his sister Kelley, and Hendrick – before being fired in 2012.

Though he still believes moving to Hendrick was a personal and professional revelation, Earnhardt Jr. said he does allow himself to wonder what would have become of the team had his father not perished on the final lap of the 2001 Daytona 500. DEI merged with Ganassi Racing from 2009 before vanishing after the 2013 season.

“I would only be guessing on the outcome of such things, but yeah, you always wonder what Dad would be doing if he were still around, what he would have done with DEI, where it would be, what we all would be doing,” he said. “Would it look completely different than it looks today? I don’t have any clear idea what it would look like, but it certainly wouldn’t be what we have today. And everything, I think, would be completely different.

“The sport would be a little different with his influence throughout the years and I think he certainly would have had a good impact on the sport. But considering how things worked out, coming to work with Rick was a huge break for me and really a great opportunity. But I certainly think about the what-ifs, but I don’t know if I had stayed at DEI, if it would have made much of a difference for the end result for that place. It was a very challenging time for the company and it was a difficult decision to make, but I think it was the right one.”