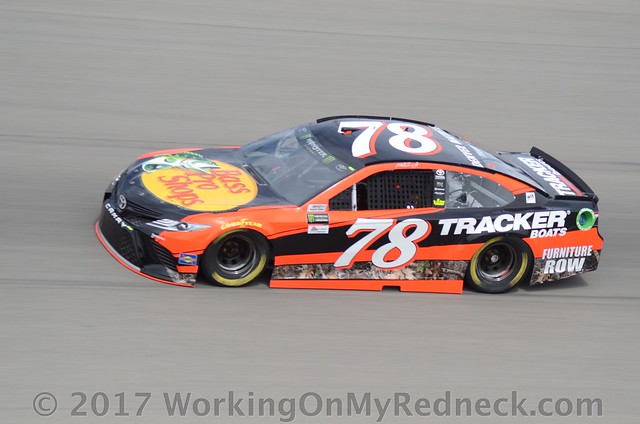 Though he can rewrite some of his own NASCAR Cup Series records during this weekend’s race at Texas Motor Speedway, that is not foremost on the mind of Martin Truex Jr.

Following his win at Kansas Speedway two weeks ago, Truex set two 1.5-mile records — most season wins on a 1.5-mile track (6) and most consecutive 1.5-mile wins (4).

With the mile-and-a-half Texas Motor Speedway being the next stop in the Round of 8 playoffs, needless to say Truex and his Furniture Row Racing teammates are looking forward to the speedy Texas track.

“We like going to Texas and feel we can run well there,” said Truex, who will drive the No. 78 Bass Pro Shops/TRACKER Boats Toyota in Sunday’s AAA Texas 500. “But just because we’ve had some pretty good success at mile-and-a-half tracks, there’s no guarantee of achieving similar results. We have to go out there and prove ourselves again.”

Truex added, “There are now seven drivers fighting for those three remaining Championship 4 spots. We’ve had good runs at Texas in the past, but have not closed the deal there. First and foremost, we want to have a strong race at Texas and acquire as many points as we can.”

Truex will be seeking his sixth straight top-10 at Texas. He finished eighth there in the spring and third in last year’s fall race.

With Kyle Busch winning at Martinsville Speedway and gaining an automatic transfer to the final four at Homestead-Miami Speedway, Truex, who leads in the overall playoff point standings, has a 67-point margin over the fifth-place driver.

“Until a NASCAR official tells me we have mathematically clinched a final-four berth we aren’t taking anything for granted,” stated Truex, who is coming off a runner-up finish at Martinsville (Va.) Speedway. “This is racing and a lot of strange things can happen.”

So far, Truex has enjoyed a solid playoff season. Take away the Talladega (Ala.)  Superspeedway race where he was involved in a multicar accident, his average finish in the other six races is 2.33. In those six races he has scored three wins (Chicagoland, Charlotte, Kansas) a second (Martinsville), fourth (Dover) and fifth (New Hampshire).

“It’s what’s ahead of us that counts, not behind us,” said Truex. “Yes, it’s been a lot of fun so far, but the mission is not complete. We want to get to Homestead and be one of the four teams competing for the season championship. We feel we have what it takes, just need to avoid mistakes and stay away from trouble.”